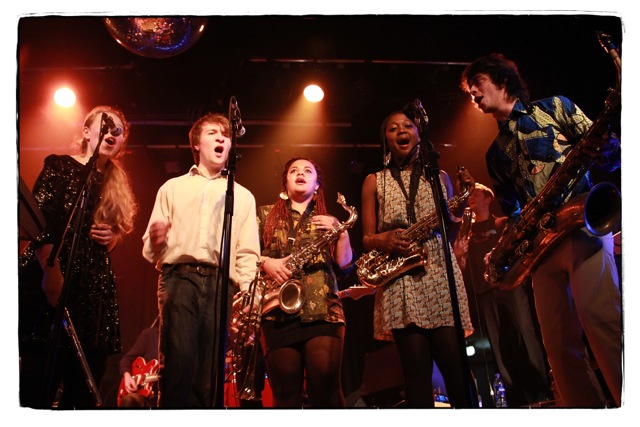 The second package show to be staged in London this year in honor of Fela's memory, Felabration 2013—a celebration of what would recently have been his 75th birthday—followed Saluting the Black President, presented at 229 back in May. The format was similar: a fast-moving succession of young, mainly Afrobeats (with an "s") artists offering their own spins on some of Fela's best-loved songs, arranged and accompanied by ex-Egypt 80 keyboards player Dele Sosimi and his Afrobeat Orchestra.

Sosimi and his magnificent orchestra aside, the star turns of Saluting the Black President were drum legends Ginger Baker and Tony Allen. Two of Felabration 2013's most memorable turns, by contrast, are still at the start of their careers: a choir from University of London Goldsmiths college, and half-a-dozen reed and brass players (pictured above) from Trinity Laban Conservatoire of Music and Dance. In 1958, Fela began four years of study at Trinity College of Music, as it was then called.

The Trinity Laban contingent was particularly strong, and its feature, "Coffin for Head of State," was a highlight of the evening. With Sosimi's orchestra in roof-raising, full-tilt boogie behind them, the students took turns to solo (with growing confidence as they registered the vociferous support of the crowd) and between times augmented the Orchestra's horn section and joined in the call and response vocal refrain. Little acorns. It is always risky to attribute opinions to people after they have passed, but Fela would almost certainly have loved this performance.

Other highlights included the two Sosimi originals that opened the show: the Afrobeat Orchestra's current single, "T.M.I. Too Much Information," and the title track from its album Turbulent Times. The Orchestra is the most exciting live band in London right now, as anyone who attends its bi-monthly Afrobeat Vibration all-nighters in Hackney is likely to agree.

An honorable mention, too, goes to Fela's longtime friend and manager Rikki Stein, who organised Felabration 2013 and Saluting the Black President. Events such as these tap into a new generation's discovery of Fela and do more to keep his legacy alive than would any number of purely revivalist events.

STOP PRESS! US documentary maker Alex Gibney's Finding Fela! will premiere at the Sundance Film Festival in January 2014. The film uses extensive archive interview footage of Fela and, says the producers, seeks "to recreate his magic in the present as a way of finding the essence of what made him tick, and why we care about him so much still so many years afterwards."