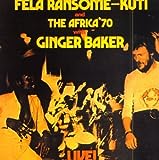 Nigerian Afrobeat star Fela Kuti brought a refreshing attitude to his music. On one hand, he was deeply distrustful of authority in all its forms. On the other, he understood that the members of his groups would have to work together to function as a unit. What emerged from that mindset was a unique approach to group dynamics. While the members of his bands knew they would have to play with precision, they could also play with grace. In this particular incarnation, six percussionists ensure the groove never drifts far, and most of the time the melody instruments also reinforce the beat. Sure, soloists regularly trade leads, and refrains call everyone together. But it is, after all, a difficult task bringing the rich rhythms of Africa together with the driving energy of funk and the panoramic color of jazz. Because Fela could make it work, he became a legend.

Enter Ginger Baker. Baker tooled into Nigeria in 1969, having come directly from Europe in a Land Rover. His stated purpose was to absorb and internalize the rhythms of Africa, and he was remarkably successful in accomplishing this task. Fela Kuti already had an astonishingly brilliant drummer in the form of Tony Allen, who was able to simultaneously perform a world of rhythm. But Ginger Baker brought something new to the mix.

Live! was recorded in 1971 with Fela's group at the time, the Africa 70. Due to its demanding performance schedule, the band is remarkably tight. Interlocking rhythms drive keyboard and guitar vamps, propelling instrumental soloists on trumpet and saxophone. There's a nice jazzy feel here, manifested both in an elastic sense of time and in an ensemble approach to performance. Improvised passages lie interspersed between statements of the theme, with Fela improvising on voice or delivering some rather frank lyrics in English and Yoruba. For example, the message of the opener: Let's get it on! (This piece features Ginger Baker sitting in for Tony Allen on drums, and he does quite well. Baker trades his usual heavy-handed approach for a lighter touch, dancing in and around the beat.)

The last track, recorded live in 1978, is a wonderful addition to the reissue of this record. It's a 16-minute duet between Tony Allen and Ginger Baker. These two men perform as equals, making for an interesting situation. Allen, as usual, is impossible to pin down. Baker manages to integrate and interweave his rhythms, making the combination much greater than the sum of its parts.

Live! is as tight, funky, and sensual as any record Fela Kuti ever made. Having Ginger Baker in the mix makes it a bit unusual, but this is an excellent recording suitable for Fela initiates and devotees alike.