Leeroy: Fela Is The Future 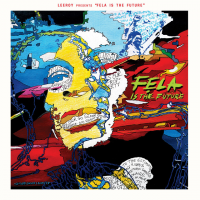 Giving DJs license to reassemble recordings made by the auteurs of an earlier generation is a risky business. The remix of Miles Davis's "In A Silent Way" on Sony's 1999 album Panthalassa: The Remixes, for instance, moved one of the authors of the Penguin Guide To Jazz Recordings to write: "DJ Cam should be horsewhipped." Which would have been letting him off lightly.

But fear not. Parisian DJ and remixer Leeroy's take on Afrobeat originator Fela Kuti's legacy is a different animal altogether. For a start, Leeroy clearly gets Kuti's music. Second, these are not Kuti's original tracks, but new recordings made in Lagos in 2017. Finally, the roll call of participating musicians includes Kuti's bandleading sons Femi and Seun, who front a track apiece, and keyboard player Duro Ikujenyo and baritone saxophonist Showboy, both longtime members Fela's bands. The rest of the crew include some of the brightest sparks on the modern Nigerian jazz and Afrobeat scene, including saxophonist Akinyanmi Akin Akinhnmola, guitarist Olu Femi Sanni, bassist Laughter Oluwatosin and percussionist Wura Samba. Other guests include the young female singers Noraa and Nneka. And Fela's first-call sleeve designer, Lemi Ghariokwu, created the cover art.

Fela Is The Future comes with some serious provenance, and it rises to expectations. There is not a single duff track. The highlights are Seun Kuti's "Beasts Of No Nation" and Femi Kuti's "Opposite People," both of which nudge the material into new territory, Noraa and Nneka's melodic takes on, respectively, "Zombie" and "Look And Laugh," Duro Ikujenyo's synthesised-vibraphone wizardry on "Fight To Finish," the core band's readings of "Go Slow" and "Yellow Fever," and Showboy's vocal on "V.I.P. (Vagabonds In Power)," the most Fela-esque vocal on the album.

With average track playing-times of around four minutes—brevity is admirable, but all these tracks actually beg to be a few minutes longer—there is only room for excerpts of the original lyrics, but these are sufficient to confirm the songs's relevance to the modern world. In an ad-lib on "Look And Laugh," Nneka observes, "Everything Fela said is happening in this country today." Sadly, this is true.

The arrangements on Fela Is The Future were written by Leeroy, assisted by Adey Omatede and Laughter Oluwatosin, with added input from the guest artists. The album is a collective effort and an excellent one.