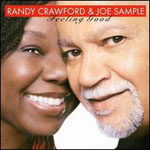 The dilemma for an artist of vocalist Randy Crawford's caliber is that, when you do a lot of things well; it's hard to say what it is you do best. Crawford has been making music since 1976 and, in that time, she's made some good albums, a lot of mediocre ones and a few awful ones.

Even her best-known song is only as a guest vocalist on The Crusaders' "Street Life," their last moment of greatness almost thirty years ago. There has never been an essential Randy Crawford album, but Feeling Good may well be her finest musical moment.

Pianist Joe Sample understands that, for a vocalist of Randy Crawford's talent, less is truly more. In the past Crawford has been saddled with full orchestras, horn sections, drum machines, batteries of background singers and albums crammed with over-produced filler. Sample and co-producer Tommy LiPuma strip away the extras and leave only the essentials: a pianist, drummer and bassist ,with an occasional guitar or percussion. What remains are sparse but lively arrangements from Sample and LiPuma that compliment Crawford perfectly. With nothing else to get in the way of Crawford's sparkling vocals she sounds fresher and clearer than she has in decades.

"Feeling Good" isn't just the title of the album and the lead-off track; it's a statement of Crawford's relaxed and rejuvenated attitude. File this one under jazz but you can hear soul, gospel, and pop throughout. She transitions so effortlessly from Peter Gabriel's moody "Lovetown" to the slinky blues of Billie Holiday's "Tell Me More and More and Then Some" because it's obvious she is equally comfortable with the differing styles.

The whole album is like a retrospective of Crawford's career in music but, despite revisiting two of her biggest hits—"Rio De Janeiro Blue" and "Last Night at Danceland,"—she sings the songs better now than when she first recorded them.

Crawford knows her way around the material and, like a gourmet chef; she never adds anything to a song that isn't needed. When she covers Harry Nilsson's classic "Everybody Talking," she sings the last line in a high soprano and never pulls that particular trick out of her bag again on the album. You don't get that too often in an era where technical proficiency is valued over tasteful restraint.

Sample's keyboard takes a supporting role here, but his ego never gets in the way. Christian McBride's bass and Steve Gadd's work on the drums and brushes are a delight throughout. The band never draws undue attention to itself and compliments Crawford in ways she never has been before on record.

Hard as it to believe, Feeling Good is the first album in the Randy Crawford discography to truly capture her versatility and artistry. And it only took thirty years since her debut album. The funny thing is, Feeling Good doesn't sound a bit like a retreat from what she has done before; she's just never done it better.

Feeling Good; End of the Line; But Beautiful; Rio De Janeiro Blue; Lovetown; See Line Women; Tell Me More and More and Then Some; Everybody's Talking; When I Need You; Save Your Love For Me; Last Night at Danceland; All Night Long; Mr. Ugly.