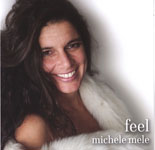 Feel, the third album from singer/songwriter Michele Mele, falls in line with her previous efforts, Like This (2003) and Laugh (2004). Both prior albums reflected her creativity and featured only original material. Her third album is not much different in format. There are a dozen tunes here, of which only two are famaliar (the Ellington/Strayhorn vehicle "I'm Beginning to See the Light" and Michel Legrand/Jacques Demy's "You Must Believe In Spring"). The biggest issue I have with this album is that these two tunes are the most distinctive ones on the album.

Michele Mele is not only a prolific songwriter (her 1989 song "That's All I Know" for singer Neil Donnell was a certified gold record), but also a theatrical director and music educator. In 1991, she composed a Christmas-themed work for the Toronto Philharmonic, which was performed in public. Her brothers, Lew and John Mele, are both professional musicians, and they perform on this album on bass and drums respectively.

In terms of my own reaction to the vocals, I cannot make a connection to most of these tunes. With original material, the hook is either the melody or the lyrics (hopefully both). While the tunes seem to be at least partially attractive, I'm not getting enough out of the lyrics or delivery to want to come back for more. "Cara Boo" actually sounds like a jazz instrumental that someone has written lyrics for. The fragmentary melody is well served by the choppy lyric delivery, sounding as if words had been penned for a Wayne Shorter composition. On the closing "Stop Talking," the music adopts a Latin jazz rhythm (something akin to Clare Fischer's "Morning"), but once again the vocal message seems superfluous.