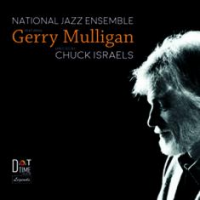 Any new CD whose cover proclaims "Featuring Gerry Mulligan" is guaranteed to turn heads, raise antennae and whip up interest. This one, on which Mulligan performs with the then-three-year-old National Jazz Ensemble, was recorded February 19, 1977, in a sold-out auditorium at the New School in New York City. In his liner notes, trumpeter David Berger expresses his regret that more than enough people to warrant a second concert (which couldn't be arranged) had to be turned away that evening. Their bad luck, as it turns out, but now, almost forty years later, those who were unable to attend the performance (and are still with us) may at least hear the results on a fairly well-recorded album.

Mulligan, who had been seen or heard from only sporadically in the decade leading up to the concert, is in splendid form, soloing brightly on half a dozen of its nine selections and adding humorous commentary between two of them. The concert opens with the first of five Mulligan compositions, the slow blues "Back at the Barn," wherein he solos with pianist Steve Brown, guitarist Bill Dobbins, bassist Steve Gilmore and drummer Bill Goodwin (the last two of whom would later become longtime mainstays in the Phil Woods Quartet). A second Mulligan theme, the well-known "Walkin' Shoes," precedes Johnny Carisi's enticing "Israel," on which Mulligan shines as the lone soloist.

Mulligan sits out on the next three numbers: Thelonious Monk's quirky "Evidence" (solos by tenor Dennis Anderson, trumpeter Mike Lawrence and trombonist Jimmy Knepper), Charlie Parker's colorful "Bird Tapestry" (Lawrence, trumpet; Gregory Herbert, tenor; Kenny Berger, baritone; Arnie Lawrence, alto) and Duke Ellington's plaintive "Creole Love Call" (Jimmy Maxwell, trumpet; Margot Hanson, voice) and returns for the last three: his own "Thruway," "Idol Gossip" and "Ballade" (the last arranged by Bob Brookmeyer). "Thruway," the most animated number on the program, finds Mulligan and trumpeter Waymon Reed squarely on target. "Idol Gossip," another loose-limbed swinger, is a Mulligan showcase on which he trades fours toward the end with drummer Goodwin. Mulligan prefaces the lovely "Ballade" by quoting remarks from a reviewer whose conclusion was that the song was actually an etude. "If only I'd known that," Mulligan quips before introducing the "ballade-cum-etude" that ends the concert on a charming note.

Thanks to Mulligan's imposing presence and generally decent recorded sound, a tasteful concert that is well worth hearing and savoring, even forty years after the fact.