Fathom Events Presents The Who in Hyde Park

By DOUG COLLETTE
October 17, 2015
Sign in to view read count 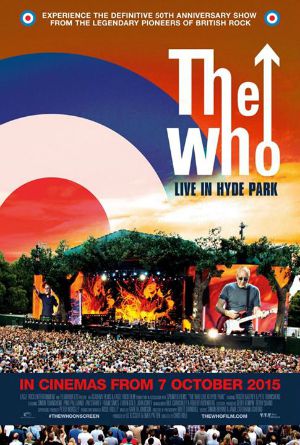 The Who
The Who in Hyde Park
Fathom Events: Palace 9 Cinema
South Burlington, Vermont
October 8, 2015

As presented by cinema entrepreneurs Fathom Events in selected cities the fall of 2015, Chris Rule's film of The Who in Hyde Park is ideally suited for viewing in theaters, particularly those like South Burlington's Palace 9 where the Grateful Dead's annual Meet-up at the Movies as well as the July 4th 2015 Fare Thee Well shows were offered in such grand style. Venue personnel were careful to insure the curtains were opened as wide as possible before the screening began and wisely so: the various panoramic shots in the two hours plus gave perspective neither concertgoers nor performers might've been able to appreciate.

Wide-angle views of Hyde Park capturing the mammoth (70,000 plus) crowd as well as the London cityscape were no less awe-spring in darkness or daylight of June 26th. Similarly stunning were the closeup shots of the principals with the graphics projected stage rear as backdrop for guitarist/vocalist/songwriter Pete Townshend and especially vocalist Roger Daltrey. And while repeated images of the deceased members of the Who, drummer Keith Moon and bassist/vocalist/songwriter John Entwistle, only scratched the surface of the alternately violent and euphoric dynamic of the quartet at its performing peak, the tribute was altogether honest in its intent even without the lighthearted but no less affectionate comments of Townshend.

Those portraits and action shots achieved the same end as the surviving pair's perseverance in performing. reminding not just of the legacy of the band—clearly depicted via interview footage with the likes of the principals, Led Zeppelin's Robert Plant, the Stooges' Iggy Pop and former Smiths' guitarist Johnny Marr—but of the enduing substance of their best material and how it continues to so deeply move listeners today.

The audience needed no encouragement to roar in sing-along right from the outset, even with the early pop-oriented tunes such as "I Can't Explain" and "The Kids Are Alright," those selections that benefited most from the professionalism of the eight piece band (including in its number Townshend's younger sibling Simon as well as Beatles drummer Ringo Starr's son Zak Starkey, arguably the linchpin of the band).

Initial footage prior to the concert content itself placed the Who's music in the proper context as rooted in the environs of London, but even so, seeing all ages of attendees including toddlers (and teens) upon shoulders of their parents and friends, respond so heartily to this music is validation, if any were needed, that songs like "Bargain" and "Baba O'Riley," are among the greatest rock and roll songs of all time. Little wonder then that such numbers from Who's NextQuadrophenia (MCA, 1973), "I'm One" and "Love Reign O'er Me," overshadowed the band.

Wisely sequenced toward the long homestretch of the two hour set sans encore, these inherently dramatic selections, like the culls from the rock opera Tommy (MCA, 1969), "Listening to You" and "See Me Feel Me," had a dazzling effect on the audience in combination with the aforementioned stage production. But even apart from the visual stimuli the film's director so fully and accurately captured, "Pinball Wizard" sent an electrifying current of excitement through the crowd that reaffirmed the Who's abiding connection with their audience (as if, at this point in the film, one were really necessary). Long before the somewhat anti-climactic conclusion of "Won't Get Fooled Again," the contrast in vintage and present day Who stage dynamics was never more apparent, despite the strength of Daltrey's voice and absolute lack of caricature in Townshend's windmilling of his guitar.

Yet it's fair to say that, as presented in The Who in Hyde Park, this ensemble fronted by the two survivors of the original band is, for all intents and purposes, a tribute band, though perhaps the greatest in the world. So, anyone who's been apprehensive about seeing the Who live since the passing of Moon and Entwistle would have their trepidation validated, but would nonetheless ultimately be surprised and pleased; the point of emphasis regarding this band's legacy was loud and clear within the film, bolstering the wisdom of Townshend and Daltrey's persistence in performing, but, more importantly, suggesting the film may ultimately become an essential piece of the band's recording history, worthy of more than the handful of attendees present for its Vermont screening.