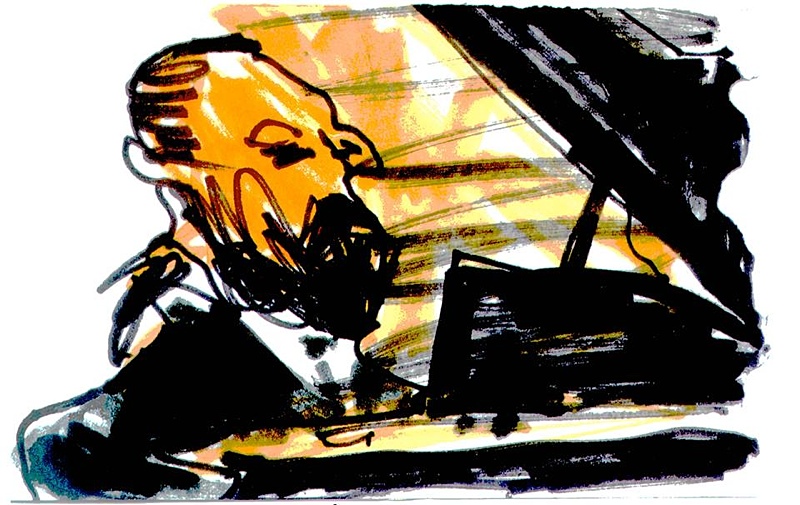 By BRUCE KLAUBER
November 11, 2013
Sign in to view read count

The region's jazz scene and jazz community will not be the same without Father John D'Amico. Yes. He was one beautiful cat.

Pianist Father John D'Amico, who held that piano chair for years and recently passed away at the age of 74, possessed all those qualities. Those who deemed him "a saint" were pretty accurate, as "Father John," among many other things, was a one-time Roman Catholic priest, ordained in 1966.

To play the 23rd Street Café' gig, having a connection to "a higher authority" certainly helped. This isn't your standard jam and never was. On any given evening, Father John—along with his longtime bassist Kenny Davis and Café' jam coordinator/drummer "Big" Jim Dofton—had to back up dozens of singers and instrumentalists of all ages, styles and levels of ability. Anyone with ears who visited or sat in at this Philadelphia institution would be happy to tell you that knowing the song and/or the key that it's in was never a requirement. Still, Father John did it all, Tuesday after Tuesday, making a kid country fiddler or 93-year-old trumpet player sound as good as the various visiting pros who sit in year after year.

And of the music at the 23rd Street Café? Father John would have told you that some of it was great, some of it was near-great, and some of it was not-so-great. Then he would laugh heartily, and move on to back up another singer on yet another version of "Summertime" or "My Funny Valentine."

He never judged, never criticized, never gave less than his all, and was always upbeat and encouraging to one and all. Lesser talents—and artists of lesser temperaments—would have jumped ship from this gig after two weeks. There are a bunch who have. Not Father John.

"He was the kind of person you really liked," his wife of 44 years, Kathleen, told John F. Morrison of the Philadelphia Daily News. Indeed, in a difficult business, there was never, ever a negative word said about Father John D'Amico. In fact, in a career as a piano soloist, bandleader, composer and educator that spanned more than 40 years, the most frequently heard words about him were—and are—"beautiful cat."

His "day gig," as they say in the vernacular, was as important to him as his playing. He worked for 23 years as a probation officer for Philadelphia's Court of Common Pleas in the area of drug and rehabilitation, and worked on behalf of a number of charitable causes, many involving the Hispanic community.

As a jazz player, Father John was unique. With his long-time trio members, bassist Kenny Davis and drummer Gregory McDonald—and as a solo artist—he was one of the most sensitive and astute interpreters of the music of Thelonious Monk and Bud Powell. But he didn't stop there and continued to evolve stylistically and was, when he wanted to be, as contemporary as any pianist working today.

Fortunately, he recorded extensively, worked just about everywhere—including a neat job in Cannes, France— with legends like Lionel Hampton and Philly Joe Jones, and was deservedly the recipient of several honors, including the John Coltrane Award for Outstanding Achievement in Jazz.

Besides his wife, he is survived by two sons, Darius and Michael; a daughter, Madeleine Spencer; two sisters, Christine DeVault and Margaret Lacey; a brother, Francis; and four grandchildren.

There will be a memorial service on November 17, beginning at 4 p.m., at Annunciation of the Blessed Virgin Mary Church, Carpenter Lane and Lincoln Drive, Mount Airy. Father John's wife, Kathy, has requested that in lieu of flowers, a tax-deductible donation be made in John's name to Jazz Bridge, c/o JazzBridge.org.

The region's jazz scene and jazz community will not be the same without Father John D'Amico. Yes. He was one beautiful cat.