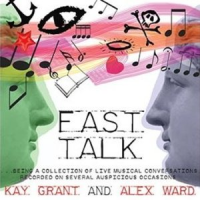 It is not often that the human voice is pitted against another human voice expressed through the vibrations of a moist and well-shaven reed of any instrument that has one, let alone a clarinet, which is made of seasoned wood and has the ability of being made to cry and wail just as naturally as another human voice. Yet this is exactly what can be experienced on the extraordinary Fast Talk, featuring vocalist extraordinaire Kay Grant and clarinetist Alex Ward. There is something ethereal and beautiful about listening to the vocal gymnastics of Grant's voice as she cuts loose; as if leaping off a proverbial cliff, she allows her voice to be led where the heart desires. That heart is both magician and mathematician. And this is a realm where Grant comes into her own. She jumps and soars, as if ascending asymmetrical stairs. In these astounding elevations she reaches improbable heights in register, coloring each successive leap with dramatically changing hue. She might then tumble in impossible parabolas that suddenly flatten, then ripple as the ululations rise from the straight lines she seems to ruffle with deliberate mischief and remarkable wit.

Knowing that she is never alone feeds Grant's creativity as she bounces her dramatic inventions, which play beautifully against the woody voice of Alex Ward's clarinet. Ever the cognoscenti of improvised music, Grant and Ward turn tonality on its head when it suits them and likewise with atonality. In this regard, Ward seems to be one with the wood and lacquer of his instrument. At the hands of the clarinetist all barriers between register dissolve to reveal one wide and colorful palette into which Ward swoops in and out. He wields his instrument like a sonic brush as he begins to paint a lively canvas with magnificent colors that melt into one another as they reveal their bountiful connection with nature. Playing with color and tone in masterly fashion, Ward is a perfect foil to the human voice that screams and warbles musically ahead and behind him.

Most of the music on this program is highly impressionistic. However, in the cut and thrust of the charts there is a distinctly defined narrative string that emerges. There is nothing linear about this and, like something out of Edward Lear, the music/narrative brakes and starts again, explodes into fluffy clouds, winds down into the depths of gutbucket blues, always emerging with spectacular wit and the choicest of musical wisdom. Both musicians explore irony by twisting form into impossible musical shapes. Ward leaps from one note to the other, but soon realizes that Grant's voice is more elastic in where it can go once stretched and he withdraws instantly to wail and wallow in his woody domain. The heart-stopping drama of the music continues throughout the music creation, at the end of it all a singularly memorable document that glorifies not only human voice, but the voice of two musicians who break anchor and fly.

May I have this Dance; And Another Thing; Consider the Alternative; Wood for the Trees; Salisbury Blues; You Don’t Say; Thin Ice; Tale of Two Heads; Absolutely (Not); Take the Scenic Route.