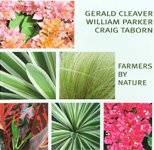 The seeds for improvised music were sown long ago in an age that can only be imagined, but are reflected in the improvised music of today. The sound of musical instruments, both contemporary and from times gone by, can symbolize the voices of those people who made up songs while they worked, practiced rituals, or congregated with their families. Drummer Gerald Cleaver, bassist William Parker, and pianist Craig Taborn own this agency of improvisation. The trio, a group designed by Cleaver, demonstrates its genetic disposition on Farmers By Nature, from a live performance at The Stone in New York City, June, 2008.

The music develops from the smallest increments of sound into those that are louder and stronger, and finally retreat to rest and sleep within a completed growing cycle. It is as if the weather necessary for growth has prompted the process; the sun and moon have influenced how the music transforms.

Percussive vocalization integrates itself with the scraping of Parker's bow on his bass followed by occasional pizzicatos. Cleaver sporadically thumps on the cymbal, snare, and jangles tiny bells. Pianist Taborn gingerly participates in the mix. On "Korteh Kheh," the three players display their instruments' understatements before they begin to grab hold of the groundwork and dig in which, like organic maturation, takes awhile to flourish. The sound becomes more continuous and purposeful on "The Night," as Taborn becomes less diffident in planting chords and eventually opening up into dissonant fingering sequences. Parker entertains fewer silences in his riffing and Cleaver threads together a more consistent series of taps on various drum edges and skins.

Midway, the musicians discover their groove, despite possessing no overt rhythmic structure. It is toward this place that "Cranes" has been headed, without knowing beforehand that they would discover it. It is replete with Taborn's persistent double-handed chordal repetitions in the treble end of the keyboard; Parker's wholly consistent motion on the bass strings and the unfolding constancy on the drums. Cleaver's pounding on the bass drum and regulating light stick work on the cymbals is intermingled with the rattling of seed pods or tiny bells; then the foot-tapping rhythm comes out of seclusion. Each musician plays his part in the syncopation; each musical line has flowered. The rhythm provides a means to exit into a bouquet of strangeness.

Bowing and tickling and clinking jump-start the trio into heavier full-bodied statements with "Not Unlike Number 10" and "In Trees." The subdued subtleties and strengths of the drums and the piano compliment the stalwart nature of the bass, as best put forth in the multiplicity of sounds in Parker's solo within "Fieda Mytlie"—perhaps translated as Feed Her Mightily.

Parker becomes the ever-reliable sturdy oak, never waning in expression, never overwhelming the band. Always listening to one another, Cleaver and Taborn wend their way skillfully through space and time, searching for musical subsistence. The ensemble behaves like a symbiotic ecosystem from which is harvested a truly original product.