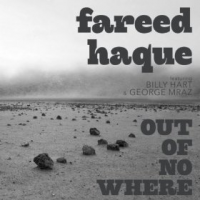 Fareed Haque is quite clear about the impact of guitarist Pat Martino on his own playing: "He is my inspiration in jazz guitar. And if I have a mission, it's to blend the John McLaughlin world with the Pat Martino world. Every guitarist, every musician, is a synthesis of the history. So if you want to understand Pat Martino, you've got to listen to Jimmy Smith and Grant Green. And if you want to understand me, you've got to listen to John McLaughlin and Pat Martino."

Raised in Chicago by a Pakistani father and Chilean mother, Haque sang an indispensible voice in the late, lamented electric jam ensemble Garaj Mahal. He has since been voted Best World Music Guitarist by Guitar Player magazine and recorded and performed with Paquito D'Rivera, The Zawinul Syndicate and Sting. On Out of Nowhere, his Charleston Square label debut, the guitarist intersects two different ensembles: A trio with bassist George Mraz and drummer Billy Hart, and a larger ensemble with bassists John Tate and Doug Weiss, drummer Corey Healey, keyboardist Rob Clearfield and Salar Nader on tabla.

The trio sessions include the "Out of Nowhere" title track, where Haque's acoustic guitar shimmers with riffs that shine like quicksilver while Mraz and Hart heat up the rhythm pot to boiling beneath, altogether sounding like music made by Haque's inspiration, Martino. The trio closes this set with a meandering, abstract waltz, led by Mraz's bass, through "Lollipops & Roses," a Perry Como pop hit. Haque's parents had this Como album (By Request [RCA, 1962]) when he was a child, and he recalls it fondly: "It was great, if you like that kind of singing. You have to be in the right mood. If it's Christmas Eve with a fire going in the fireplace and you put on that record, it's the perfect mood."

Through the coolly meditative ten-minute opener "Waiting for Red," the quintet launches you deeply into Haque's music and his guitar sound, which seems to draw straight connecting lines between the boldness and brilliance of Martino and Pat Metheny. Haque switches to Moog synthesizer guitar to change the colors of John Coltrane's "Giant Steps." With Clearfield switching from piano to electric organ, Duke Ellington's "I Got It Bad and That Ain't Good" resurrects the classic Jimmy Smith / Wes Montgomery Verve sound, almost precisely three minutes but a big bedrock of groove music.

"I have recorded a lot of music," Haque concludes, "but at the end of the day I'm still from Chicago and I grew up playing jazz, blues and R&B on the Chicago scene. And this new album reflects that."

Waiting for Red; Tex Mex Jungle; Flood in Franklin Park; I Got It Bad; Giant Steps; Inner Urge; Out of Nowhere; Lollipops and Roses.