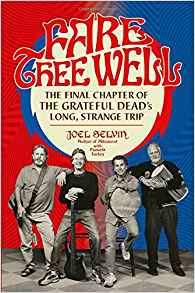 Joel Selvin's Fare Thee Well may end up equally parts enlightening and disillusioning for whoever reads it. Drawing upon his coverage of the Grateful Dead over the early course of their history, in collaboration with Atlanta freelancer Pamela Turley to glean her insight into events of more recent vintage, the former San Francisco Chronicle reporter writes with a crisp efficiency. As a result, in less than three hundred pages of The Final Chapter in the Grateful Dead's Long Strange Trip, Selvin relates the alternately acrimonious and fluid relationships between the four surviving members of an iconic rock and roll band struggling mightily to deal with both business and personal issues in the wake of the passing of their titular leader, guitarist Jerry Garcia, in 1995.

By dexterously juggling various parallel timelines involving guitarist Bob Weir, bassist Phil Lesh and drummers Bill Kreutzmann and Mickey Hart, Selvin and Turley clearly communicate a wealth of insight and information, while simultaneously painting distinct, vivid portraits of each individual, not all of which are flattering; it's to the authors' credit that, by and large, they maintain their fundamental journalistic integrity rather than indulge in (much) editorializing upon the often self-serving machinations of these men who, in dealing with their families and their business partners, act so contrary to an image of flexible generosity as typified by their musical interactions.

More than once during the course of the book, recollections of the bitter disputes among The Beatles come to mind, specifically the three-against-one alignment pitting Paul McCartney against John Lennon, George Harrison and Ringo Starr. But, in contrast to that situation, where Sir Paul fought something of a losing battle versus his peers, a set of circumstances arises with the Dead men where Lesh, more often than not in conjunction with the kindred spirit that is his wife Jill, conducts one power play after another, similar to the ongoing veto that kept the democratically-formulated band from studio recording for years. This naturally irascible man is hardly the only one of the four so disposed: Kreutzmann, for instance, is (sometimes violently) loathe to abandon his idyllic Hawaiian existence, while both Weir and Hart have their own agendas and the ex-wives of the deceased engage in bitter disputes of their own, all of which the authors chronicles in often painful detail.

The writers' healthy detachment from their subject serves to camouflages an occasional sense of hurry as they proffer descriptions of the various tortured processes by which the 'core four' dealt with issues such as ownership of Jerry Garcia's guitars, the disassembly of the Grateful Dead business operation and the merchandising agreement with Rhino Records in 2006. But some instances of slightly faulty grammar are less discernible than glossing over some illuminating facts: it's suspect, for instance, to see no direct name reference to Derek Trucks' late uncle, Allman Brothers' co-founder/drummer Butch Trucks, in recounting the early enlistment of the guitarist into an early cadre of Phil Lesh's Friends, while to simply state some original songs on the bassist's There And Back Again (Columbia, 2002) album were composed by "other guys in the band" is oddly dismissive of Warren Haynes' stellar contribution (a vivid paean to Jerry Garcia titled "Patchwork Quilt"). For these writers to give such short shrift to a musician and composer who otherwise plays a significant role in the story of evolving Dead lineups early in the 2000's is an egregious shortfall.

There's otherwise little doubt where Joel Selvin and Pamela Turley's sympathies lie, but, in staunch allegiance to the essential objectivity of their vocation, the writers allow events to speak for themselves, at least most of the time (snarky comments about Lesh's singing are an exception). And while the team did not have much extensive direct access to the band members—only Bob Weir and Mickey Hart spoke for purposes of the book—a wide range of personnel within the band's orbit deigned to edify them even when it comes to extremely awkward episodes like the firing of loyal, long-term employees like jack-of-all-trades management figure Cameron Sears.

Selvin's gracious and self-deprecating "Acknowledgments" more specifically delineates the scope of his personal interactions with duly credited sources, while he assiduously attributes quotes from third-party interviews in print, web and other media, in the ten full ten pages of the "Bibliography." It's not all that implausible to suggest that, with both Lesh and Kreutzmann having published their own memoirs, Fare Thee Well is as close as we will ever get to a well-rounded depiction of the latter-day world of the Grateful Dead.

In that light, fairly unflattering phenomena like Weir's struggles with addiction(s) might seem to beg for balance. But, bereft of Jerry's Garcia's calming zen presence, his survivors seem to self-consciously default to a fatalistic nonchalance that, while it's fertile ground for musical interactions, only serves to undermine their personal and professional ambitions, leaving them predisposed to backbiting in public and private. Each of the four principals admit to as much, but nonetheless maintain so cavalier an attitude, none of them rarely do more than the minimum to combat its negative impact. A major exception to this series of convolutions-and wholly symbolic of their love/hate fraternity—is Weir's unheralded solicitation to expedite Lesh's liver transplant in 1999.

The Final Chapter in the Long, Strange Trip of the Grateful Dead is nothing if not a composite of conflicting sentiments and, all too often, willful cross-purpose, so Joel Selvin and Pamela Turley are smart to pause at a few points in their embroidery of this multitude of threads, in order to review and summarize the entanglements for the reader. These interludes do nothing to reduce the underlying suspense embedded in a story that only superficially came to closure with the 2015 concerts held in California and Chicago at Solider Field (site of the last performance of Garcia with the group in 1995). In fact, such segments elevate the drama, as occurs at the announcement of Lesh's business agreement with Peter Shapiro: this subplot morphs into a a deft transition to the climax (sic) of Fare The Well after, not surprisingly, a pithy account of the latter's somewhat unlikely rise to prominence in a jamband culture. Selvin posits the impresario as a direct but expansive (and suitably inclusive) reflection of the Grateful Dead ethos (and successor to the late Bill Graham in a previous era): as Shapiro moves into prominence from his position as final overseer of New York's Wetlands to the creator of the Brooklyn Bowls and current operator of the Capitol Theatre, he proves his mettle in the peculiar arena of rock show promotion (though not without accusations of the proverbial cash-grabbing) via the circuitous negotiations for what ended up being five concerts commemorating the fiftieth anniversary of the Grateful Dead.

Selvin's play-by-play of those performances, no doubt seasoned by the more recent concert experiences of Turley to which he graciously refers, depicts more than a few painfully awkward moments. Yet, those are no more or less cringe-worthy than the blow-by-blows he describes during certain passages in the book leading up to the event itself: the Lesh's various strategies to assume, then maintain, autocracy within the band's community at large carry through to the dubious nature of the assigned roles within the personnel lineup of 2015 including long-time Dead collaborator Bruce Hornsby (and to a slightly lesser extent, the other keyboardist Jeff Chimenti), not to mention Phish's Trey Anastasio.

Given how complimentary is the account of the latter's participation in preparation as well as performance of the shows, it's a marked oversight not to more extensively stress the demographic of his band within the Deadhead community that so benignly over-populated the Windy City for the July 4th weekend shows. Selvin prattles unnecessarily in his "Coda," as if to merely fill a word requirement when either he or Turley might better have explored not just the symbolism of, but the practical value in the presence of the guitarist/vocalist; given the multiple mentions of Phish's rise in profile in the wake of Garcia's passing—not to mention the utter devotion with which Anastasio prepared and ultimately contributed so much to the relative success of Fare Thee Well—the book could only gain substance with more incisive dissection of the preeminent jamband's influence on this momentous event of their direct forebears.'

Still, the final irony of this book may not be that its accounts of action, like so many Grateful Dead concerts, are enervating and rewarding in turn, but that it ultimately belies its subtitle. At his Terrapin Crossroads complex (modeled after the late Levon Helm's Woodstock barn enterprise), Phil Lesh plays live regularly, while Weir, Hart and Kreutzmann's alignment for Dead & Co. with erstwhile guitarist/vocalist John Mayer (the origin story of which appears here almost as an aside), is nurturing a metamorphosis of the Deadhead populace, inviting and incorporating new and old generations of loyalists. The trio's somewhat serendipitous, fruitful coexistence with their iconoclastic peer also seems to be unfolding with the cryptic but unassailable logic of a scintillating Grateful Dead improvisation, thereby holding karmic implications the foursome's fallen figurehead would appreciate. Given the prospects of fascinating tales behind those separate, but intrinsically entwined movements, Joel Selvin and Pam Turley should plan a sequel collaboration (if they aren't already) or at least substantial addition of such pertinent content to the inevitable softcover edition of Fare Thee Well: The Final Chapter of the Grateful Dead's Long Strange Trip.