Roscoe Mitchell and the Note Factory: Far Side

By HRAYR ATTARIAN
November 12, 2010
Sign in to view read count 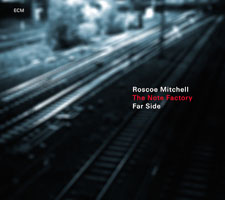 Roscoe Mitchell's Far Side, with its theatrical quality, could easily function as a soundtrack to a modernist play. The beginning of the first and longest piece, "Far Side/Cards/Far Side," is reminiscent of the works of 20th century composers like Alfred Schnitke and Arvo Pärt, in the ominous sea of notes pouring out of the dual pianos and basses that buoy Mitchell's breathy and urgent alto sound.

As Mitchell's saxophone grows stronger and clearer, the strings give way to an almost Beckett-ian six-way dialogue among the trumpet, alto sax, piano, bass, cello and drums. The second half starts with a fast-paced trio improvisation, led by pianist Vijay Iyer. Mitchell then joins in, taking the lead on soprano saxophone with a complex solo that ends abruptly. The thread of thought is quickly picked up by trumpeter Corey Wilkes, who creates a stark contrast to the soprano by playing mainly in the lower registers. Wilkes is as perfect a partner to Mitchell as the late Lester Bowie was, which is not to say that the trumpeter's tone is derivative; Wilkes' is deeper and brassier—although, like Bowie, heavily influenced by R&B and blues.

As with his other recent works, Far Side is an effective and seamless amalgam between composition and improvisation. "Quintet 2007 A For Eight" is a multi-instrumental stream-of-consciousness, improvised dialogue that is sometimes reminiscent of an orchestra at practice. "Ex Flover Five" is much more structured—even if not completely devoid of improvised lines—with Craig Taborn playing circular, almost Don Pullen-esque lines, supported by arco bass and percussive drum work, and with alto and trumpet introducing brief anxious wails...often together, but sometimes following each other. The piece ends with a very expressive cello/alto duet.

"Trio Four for Eight" starts as a spirited, mostly improvised, discussion between cello, flute and bass. Trumpet replaces flute as the momentum builds, the pianos then entering on this more structured, melancholic tune. The piece ends with a unique and quite mellifluous drum duet.

This album is further testament that, as a composer, improviser, musician and leader, Roscoe Mitchell continues to innovate and come up with fresh musical concept that will surely, like all of his work, stand the test of time.