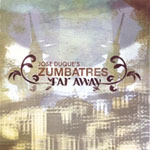 Venezuelan-born, Portsmouth, New Hampshire-based drummer/percussionist Jose Duque leads Zumbatres, a band that doesn't read like a Latin jazz band (and certainly not one from south of the border), for his second album, Far Away , but indeed they sound like one. There is some talk in the liners about the blending of borders insofar as crossing boundaries (e.g. Venezuelan Latin music) and other brands of the genre from Central and South America, but frankly I don't hear it. Latin jazz is still Latin jazz whether it comes from New England or Dutch Guinea.

With personnel like pianist/keyboardist Dan Sure; bassist Nate Therrien and guitarist Phil Sargent, perhaps the only ringer is guest percussionist Annegret Baier, who may be the only Latino in the band.

The band kicks off with the heavily salsa-ized "Danilo," leaving no doubts as to its authenticity, and closes the set with a live version of the same tune. "Danilo" is a showcase for Duque's considerable percussion skills. On "At Last" Sure is locked into the intricate Latin dance pattern set by the drummer. The second half of the album features Sargent, who is not a Latin-influenced guitarist, but makes the fit anyway and plays some fine flowing melody lines and solos on tunes like "El Gato Enmo-Chill Out." The title tune is a good example of mellower Latin music—likely a respite for dancers, with more Corazon than frantic pulses.

What makes the album work is a fine synergy between the players with interaction and empathy. The album concludes with three live bonus tracks recorded at The Press Room in Portsmouth, New Hampshire in during the winter of 2006.

Danilo; Far Away; At Last; Rumbatres; One Year Later; El Gatol Enmo-Chill Out; Gathering in Blue; Far Away; Danilo.