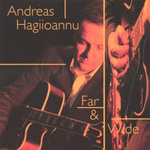 British guitarist Andreas Hagiioannu spent his teens in experimental/improvisatory rock music and his late teens with fusion. It was only when he started listening to guitarists like Kenny Burrell and Jimmy Raney that he shifted gears on the instrument. As a jazz guitarist, Hagiioannu honed his craft by working in the cafes and bars of the Midlands area of Great Britain as both composer and guitarist.

Hagiioannu's debut, Far & Wide, is important in several ways. He plays all original material that is largely familiar to jazz aficionados as songs that sound like they belong in the Great American Songbook even though they are not. He plays these original songs on both acoustic and electric guitar, including several solo performances on archtop guitar. The acoustic material is usually performed solo and finger-picked on tunes including "You Light the Way" and "Martha. Drummer Alan Savage contributes sizzling kit work on much of the material, sparking these performances up another notch. Dirk Griffin is the bassist.

What makes Hagiioannu's presentation so good is that on the trio tunes, the plectrist's artistry, and solidness of the material combines as something new, even as it sounds strangely familiar.

The delivery of the acoustic and solo performances is more routine, but Hagiioannu is pleasure to listen to.