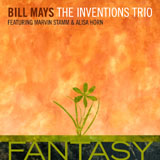 For those who have never seriously incorporated classical music in their musical diet, Fantasy, the new crossover album from pianist Bill Mays, trumpeter extraordinaire Marvin Stamm and cellist Alisa Horn, collectively known as The Inventions Trio, is a good starting point for some exposure to classical pieces rendered with a sensibility toward improvisation.

Mays, perhaps best known for his longtime association with the marvelous singer Sarah Vaughn, is a consummate musician who has taken classical works from Rachmaninoff, Debussy and Bach, sprinkled them with some Gershwin and some Charlie Parker for good measure, and interwoven them with arrangements that allow perfectly for wonderfully sensitive interplay by Stamm, the master of trumpet tonality, and Horn's haunting cello.

"Vocalise is a sensitive piece that showcases Horn, while Stamm's crystal clear trumpet work is the perfect counterpoint to Mays delicate, lissome playing. Mays' beautifully arranged and written "Fantasy " suite is made up of three movements that build tension between piano and cello, while a soaring Stamm punctuates throughout.

Having seen Stamm perform previously in a straight jazz trio setting many years ago, it was a treat to reconnect with this extraordinary and underrated player in a setting that showcases his impeccable tonal quality.

Mays shows his mastery of melding two seemingly incongruous musical forms by constructing a delicate bridge that allows access to areas of musical possibility that should be more fully explored. Horn's sensitivity is a welcome addition throughout.

This outing makes a thoughtful addition for those who want to explore some Euro-centric, classical-oriented music done in tasteful way, while still satisfying the spontaneous creativity that jazz improvisation plied by master musicians can bring to any music from any source.