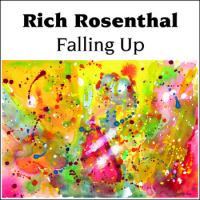 At a young age, New York-based guitarist Rich Rosenthal guitarist, was weaned on the cutting-edge sounds of Steve Lacy, Sun Ra, the Art Ensemble Of Chicago and other iconoclasts, broadening the jazz vernacular. With a lack of family support for becoming a career musician, Rosenthal needed to work through some inner-conflicts, while subsequently completing a jazz program at New York City's New School. Moving forward, the artist gigged with hornist Joe McPhee, bassist Dominic Duval and others amid studies with eminent guitarist Bruce Arnold. On his debut solo outing, he gains exemplary support from veteran saxophonist Joe Giardullo . Indeed, Falling Up is irrefutably inspiring.

The quartet dodges bullets, uses space as a means to sustain an open-air group sound, while expanding and contracting via alternating currents. Whereas, Rosenthal's comprehensive attack and astounding technical gifts are evident from the onset. The final track "Eternal Meltdown," opens with his sizzling, fuzz-toned single note leads. He puts matters into overdrive, and turbo charges the processes as he wreaks devastation on his axe. With drummer Matt Crane's swirling asymmetrical pulse and bassist Craig Nixon's pumping bottom-end, Rosenthal propels into vehement expressionism, where he seemingly pours his heart out for the entire world to hear. After his extended solo, Giardullo rifles back with flickering choruses on his soprano sax work as the rhythm section mimics the frontline towards closeout. Nonetheless, Rosenthal possess colossal chops, but shines as a persuasive composer and cunning idea-man. Perhaps the musical translation merges his past personal struggles with a new lease on life. (Passionately recommended...)