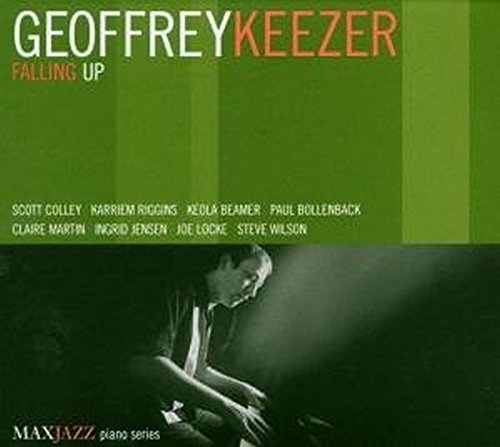 Geoffrey Keezer has as a distinction being the penultimate pianist to perform in the Ray Brown Trio before the bassist’s death in 2002. He is a durable stylist with a big orchestral sound that he provided for the late Brown on recordings such as Live at Starbucks and Walk On . Mr. Keezer has also released well-received recordings as leader, such as Zero One and Sublime . His most recent release is one he was tapped for as the next installment of MaxJazz's successful Piano Series. Keezer brings a bit of a different philosophy to this disc than was present on his earlier efforts.

For Falling Up, Geoff Keezer brings in Hawaiian musicians Moanalani Beamer and Keola Beamer for a decidedly far west... way far west version of jazz. These musicians contribute to three breezy island-tinged tunes that are highlights of the present session. Not straying too far, Keezer does employ a standard band of top drawer musicians. Bassist Scott Colley and drummer Karriem Riggins comprise Keezer’s rhythm section. He peppers his eleven-piece recital with talent from Ingrid Jensen on flugelhorn on the title cut and "Navigating by Starlight," vibraphonist Joe Locke on "Mirrim," and Paul Bollenback on guitar on the winsome "Featherfall." Always challenging, Keezer covers "Gollum’s Song" from The Lord of The Rings—The Two Towers ...talk about contemporary. On the whole, this is a very fine release by Geoff Keezer, just what we might have expected.

For more information, visit Geoffrey Keezer and MaxJazz Records on the web.