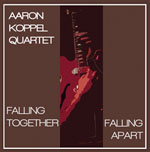 Falling Together Falling Apart is an emotionally charged excursion through the realm of modern jazz by Chicago based guitarist and band leader Aaron Koppel. The ensemble that Koppel has assembled for this recording reflects the best and brightest of the highly creative Chicago modern jazz scene. Pianist Matt Nelson, bassist Graham Czach and drummer Robert Tucker hold down the fort as solidly as any rhythm section on the scene today. Apart from the strong support given by these three, saxophonists Greg Ward and Geof Bradfield bring a strong sense of melody, invention and creative energy to every melody and solo they play. With a cohesive band, strong soloing, well-crafted compositions/arrangements and gripping guitar playing by Koppel, Falling Together Falling Apart is yet another reason why the Chicago jazz scene and its players have been receiving more and more national attention in recent years.

Koppel composed as well as arranged all of the tunes on the album, and at twenty-six years old shows a maturity in his writing, soloing and ability to lead an ensemble that reflects the real-life experience of someone twice his age. There are seldom any wasted notes in his writing or soloing. The melody section and solo on "Old Man New Tricks" is a great example of the subtlety that Koppel exudes in his playing and writing. The melody of the tune is as simple as it is eloquent, supported by clean chords that do not clutter. This strong melodic sensibility continues into Koppel's improvised solo, which is one of the few instances on the album where the band leader takes the first solo, yet another sign of the guitarist's musical sensibility and maturity. His solo is short, focused and melodic to the point of sounding like a vocal, rather than guitar solo. These qualities can be found in Koppel's playing throughout the album.

Apart from his strong showing as a performer and writer, Koppel's leadership abilities are also to be commended. Not only does he bring out the best in those around him when he's playing, he knows just the right moment to lay out and showcase his band. Tunes such as "Electric Cowgirl Boogaloo" and "Toumani" barely feature the guitarist at all. In these and other similar instances Koppel slips into the role of accompanist and lets the other members of the band take center stage. By doing so, he allows each musician to make memorable contributions to the album, and avoids producing yet another blowing session. The result is both refreshing and respectable.

Koppel delivers a masterful performance on Falling Together Falling Apart. He is at the top of his game as a soloist, his writing shows a depth and understanding of modern jazz harmony that is as exciting as it is engaging, and the tunes and ensemble are firmly in focus during each melody and solo section.