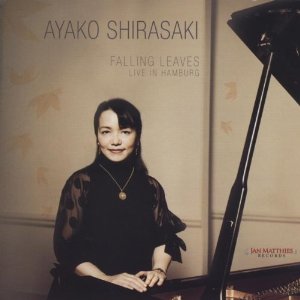 Energy is one of the most important and elusive elements in jazz. Some people foolishly equate energy with speed or skill, but the two aren't necessarily linked. Bill Evans didn't sprint around the keyboard, but his music created a cocoon of energy that enveloped an audience in a way that few pianists could ever emulate. Energy comes from the way an artist connects to a song and the way they can take an audience, whether in the room or listening at home, on the journey with them. It's all too rare to encounter a musician capable of harnessing that energy who can also deliver pyrotechnic displays of wonder when the time is right, but pianist Ayako Shirasaki is one such performer.

Shirasaki is the complete package, possessing commanding technique that comes from a classical foundation but works in complete service of jazz, and she marries her heart and head with her hands throughout Falling Leaves—Live In Hamburg. On this fifteen-song program for solo piano, she covers jazz classics from Duke Ellington all the way up to Chick Corea, but Shirasaki also goes beyond the usual suspects. Her charming "Four Seasons Medley" touches on Japanese traditional music, with a loyal take on "Sakura Sakura," and a pleasing performance of an American holiday favorite (Leroy Anderson's "Sleigh Ride").

Shirasaki also throws in a few of her own pieces, which can float through the sky on their way down to the audience ("Falling Leaves"), come with a sense of longing and romantic flair ("Far Away"), or arrive via a more percussive and quirky delivery system that serves as a suitable salute to the great Thelonious Monk ("Monkey Punch").

When Shirasaki works her way through excitable numbers, like Charlie Parker's "Confirmation" and Sonny Rollins' "Airegin," she often comes across like a combination of Bud Powell and Art Tatum, with a great degree of finesse and a fine-tuned sense of touch, but she doesn't limit herself to any single style. When the planned program reaches its conclusion, Shirasaki bravely takes requests and, despite acknowledging that she hadn't played "Moonglow" in a very long time, her performance of the song proves to be a master class of musical taste and sophistication that segues seamlessly into another request ("My Romance"). She even manages to top herself when she shifts from a superb rendition of "Take Five" into "St. Thomas," without the slightest hesitation, despite the latter being another on-the-spot audience suggestion.

With Falling Leaves—Live From Hamburg, Ayako Shirasaki proves capable of creating musical manna that falls not from heaven, but from her highly skilled fingers.