By GLENN ASTARITA
October 5, 2018
Sign in to view read count 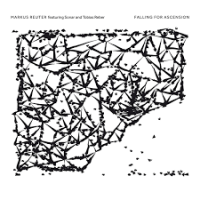 As a point of interest, Reuter advises: "for me the striking thing about this album is that the themes and melodies and rhythms that you're hearing were written when I was 14 years old. I had these little motifs set aside for such a long time and I never knew what to do with them." In addition, Reuter formed these pieces as modules, largely containing Arnold Schoenberg's 12-tone row system, and assigned to an individual performer. Many of these works are concisely woven together. The guitarists' nimble picking ride above Christian Kuntner's sturdy bass lines amid the ostinato theme-building processes, intermittently tinted with the essence of forceful King Crimson style advancements.

Reuter multitasks and often contrasts Kuntner with fluent fingering/tapping techniques and Tobias Reber's textural electronics permutations, usually residing in the background. Moreover, Kunter and drummer Manuel Pasquinelli are the stabilizers with their off-centered and slippery rock pulses that snugly align with the recurring grooves and sustain-centric guitar riffs, rolling along at a slow to medium tempo. On "Condition III" the ensemble's movements are akin to climbing a stairway, reinforced with swirling soundscapes. However, their minimalist discipline is not far from what eminent composers Philip Glass and Steve Reich abide by, where one mistake—incorrect note, improper key or pace—by an instrumentalist within a regimented unison flow could conspicuously throw everything out of whack.

The final and lengthiest track (22-minutes) boasts a terse melody line and Kunter's snappy hits, as the band changes the harmonic component with Reber's brooding EFX shadings to instill imagery of a voyage into a forbidden zone, underscored by the bassist's stout lines. Hence, Sonar, Reuter and Reber dislodge many of the conventional attributes associated with progressive rock via this compelling production that intimates a new paradigm that is the antithesis of tried and true formats.