Faith in Time: the Life of Jimmy Scott By David Ritz

By JOEL ROBERTS
February 11, 2003
Sign in to view read count 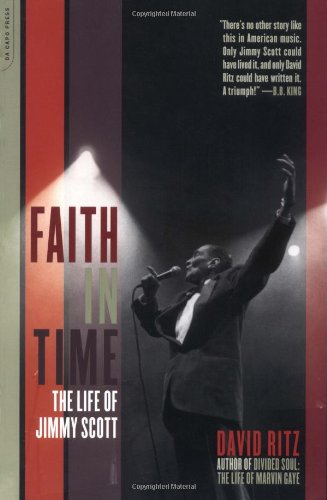 Faith in Time: The Life of Jimmy Scott

Blessed with one of the sweetest voices and kindest dispositions in jazz, Jimmy Scott has also been cursed with some of the worst luck – though the still vibrant 77-year-old song stylist would never admit that. Despite years of neglect by audiences, mistreatment by managers and record labels, endless taunts over his androgynous voice and appearance, numerous failed relationships and family tragedies, alcohol abuse, and a lifelong battle with a physically debilitating disease, Scott remains ever optimistic and remarkably free of bitterness. He's also still singing beautifully in his unabashedly emotional, ethereal and inimitable style.

For this book, author David Ritz spent years talking and traveling with Scott and dozens of his friends and family members. He traces Scott's journey through 60 years in show biz – his early days on the vaudeville circuit; his short-lived moment as an R&B star called "Little Jimmy Scott"; his associations with Lionel Hampton, Charlie Parker and Ray Charles; and his eventual retirement to Cleveland after years of fruitless attempts to find the right niche for his unique talent. The story has a happy ending, of course, as Scott is "rediscovered" in the 1980s and finally finds an inkling of the success he so long deserved.

As Ritz acknowledges, this is the work of a friend and confidante rather than a critic – and it reads that way. Ritz does an admirable job of capturing Scott's inherent sweetness and the subtle strength behind his fragile exterior. Never really probed, however, are the demons that lurk below the surface, which Scott's siblings, ex-wives and girlfriends all say come out from time to time, especially when he drinks. It's that darkness, that sadness and sense of loss that gives texture to the angelic voice and makes Jimmy Scott so compelling.