By BRUCE LINDSAY
March 2, 2010
Sign in to view read count 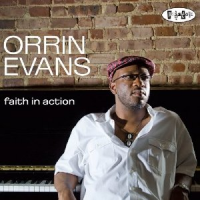 Faith In Action is Orrin Evans' first album on Posi-Tone Records and serves to further enhance the reputation of this New York-based pianist. The album is, in part, a tribute to and interpretation of the music of his friend and mentor, saxophonist Bobby Watson, who contributes five of the twelve tunes. It's a fine tribute, indeed, and demonstrates Evans' own talents as a player and interpreter.

Evans' own compositions have immediate impact—especially the opening "Don't Call Me Wally," which is driven not only by Evans' hard-hitting piano but by some fine rhythm work from drummer Nasheet Waits and bassist Luques Curtis. "MAT-Matt" is complex and changeable, regularly shifting rhythmically and stylistically. In its opening section the band plays freely, before Evans shifts to a repetitive, percussive, style. Before long, the trio enters a hard bop section via a short burst of swinging lyricism, until Waits' brief solo drum part takes the tune into a slow and reflective ending. The more playful "Two Steppin With Dawn" features drummer Gene Jackson, with Evans returning to a hard-hitting and percussive style. Jackson suits this number admirably, hitting just the right groove to maintain the tune's dynamism.

Watson's compositions have the greatest emotional impact, however. "Faith In Action" is a gorgeous tune which Evans interprets with skill and empathy. On "Beattitudes," Evans performs solo on another beautiful tune, once again finding an emotional connection that is clearly expressed in his playing. Best of all is "Love Remains," with Waits and Curtis once again outstanding, while Evans is at his most delicate and affecting.

Faith In Action succeeds as a tribute to Bobby Watson, but it also succeeds as a demonstration of Evans' talents, and as an enjoyable, creative recording by musicians at the top of their game.