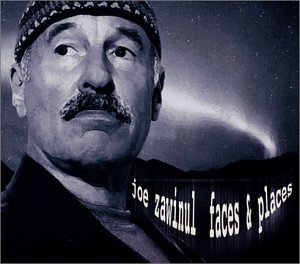 Joe Zawinul wants us to know a secret, if you take the portrait in the liner notes at face value: fusion never died. Zawinul made his reputation at the keyboards with Miles Davis and soared to stardom as the guiding light of Weather Report, a pinnacle of jazz-rock fusion which the genre has rarely surpassed. Lately he's been delving into fusion of another sort, one that might be called "world music" without any of the ethnocentrism this term usually implies. Faces & Places marks a distinctive high-water point for Zawinul, a sentinel of its possibilities and depth.

For Faces & Places, Zawinul has assembled musicians from five continents, including (most notably) Zakir Hussain on tablas, Maria Joao on vocals, and Alex Acuna on percussion. These fourteen tracks span an unpredictable range of styles from the percussion-rich Arabian soul of "Good Day," to the Indian/African fluxus of "Tower of Silence," to the spare call-and-response dance of "Cafe Andalusia." For the most part, it's radio-friendly material (read: no avant excursions here). The depth of percussion on almost every track lends these tunes a full-bodied pulse, and that unyielding foundation helps unite the record. Perhaps that's Zawinul's statement about drums being the center of music, though to be honest he rarely strays from all-too-familiar 4/4 rhythms. No big loss—view it as an artistic choice if you will. Another constant on Faces & Places is the human voice, which appears on all but two of these tunes. Sometimes it's Zawinul on his vocoder, but mostly these voices use unfamiliar languages (or none at all) that convey meaning more through cadence and spirit than literal meaning.

Each track on this record offers promise and intrigue, except for the dismal "Familiar to Me," sandwiched right in the middle. (Nice lyrics, but it's more trite than the lamest of slow jams. Fast forward.) With that said, this record is beautifully lyrical and often surprising. Listeners familiar with Zawinul's Weather Report fusion days will find it a refreshing new angle; and those who've kept up with his more recent multicultural outings will find Faces & Places a fine addition.