By EDWARD BLANCO
January 27, 2010
Sign in to view read count 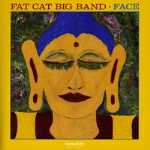 The house band of New York's Fat Cat jazz club in the West Village, The Fat Cat Big Band, finally delivers the last piece of its trilogy project. Face is produced from a 2008, two-night recording session of thirty-one original charts, from which the group's first two albums—Meditations On the War For Whose Great God is the Most High / You Are God (Smalls, 2009) and Angels Praying for Freedom (Smalls, 2009)—were released simultaneously. The eleven-member light ensemble, the brainchild of guitarist/composer/bandleader Jade Synstelien, taps into America's rich musical heritage, breathing life into the swing music of the past, albeit with a decidedly modern touch. Synstelien's music fuses the classic Duke Ellington / Count Basie big band styles with a more progressive approach, keeping the swing alive and the bop grooving, propelled by melody-driven charts and a host of superb soloists.

Synstelien's title piece opens the music in traditional big band style, showcasing alto saxophonist Sharel Cassity, bassist Ben Meigners and pianist Jack Glottman, all of whom provide brief but tasteful solos. In tribute to Mitch Borden, owner of the historic Smalls Club, and who gave the leader his first break in New York, "Blues for Borden" kicks off in swinging fashion, drawing energy from the entire horn section. Burnished solos from all six players, among them saxophonist Stacy Dillard and trumpeter Brandon Lee, the track also features a guitar solo from Synstelien. The swing continues on such tunes as "Mommy Long Legs" and the hurried "Almost Sacha's Favorite Key," where Dillard is highlighted with a steamy tenor solo, a task he prolongs on the brisk finale, "Road Song for Stacy Dillard & Alexi David."

The ballads are short but sweet, beginning with "Love's Lost Rhapsody," and followed by the soft "Ballade of Eternal Love" and "Farewell Phoenix." No doubt the serious artist Synstelien surely is, he must possess a humorous side, as his vocal skills on "Bory-Alice" and the Latin-tinged "Mamacita Tu Es Muy Bonita" leave a lot to be desired and are, of course, forgivable if the attempt was made in jest. Notwithstanding, Face is arguably the best of the three Fat Cat Big Band recordings and Jade Synstelien's finest production to date. Offering a bit of swing and swagger, Synstelien's Fat Cat Big Band is poised to change the face of today's big band sound, where the creative energy of this outing is bound to draw attention.