By JEFF STOCKTON
February 1, 2004
Sign in to view read count 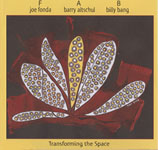 When I hear musicians shouting or humming on a recording because they can't help themselves, I take it as a good sign. The spontaneity, intensity, and pure joy that comes across in those brief outbursts raises the level of excitement and intimacy so that you almost forget you're sitting in your living room listening to a CD. Bassist Joe Fonda, drummer Barry Altschul, and violinist Billy Bang clearly enjoyed playing the tunes on Transforming the Space , and the disc's sheer musicality and accessibility took me by surprise.

I admire Billy Bang's virtuosity, but the jazz violin, in its more avant-garde moments, screeches with a harrowing intensity and raw grittiness that can be too much to bear. There are moments of that here, but not many, and on Bang's composition "Tales from Da Bronx," his violin sings in a sweet woman's voice. You can imagine the teller of the story inhabiting the notes. This theatrical quality extends to Fonda on his "Song for My Mother," where he forms one half of a dialogue with Bang, both of whom have speaking parts in this conference of two birds. After the duo have their say, Altschul changes course with a military-march drum roll that leads into an expressive extended solo from Fonda who bears down on his instrument with concentrated effort.

On "The Softness of Light" Fonda plays beautiful arco bass, freed from everything but rich, sonorous melody, and on Altschul's "For Papa Jo, Klook & Philly Too," Fonda walks alongside the drummer whose opening solo threatens to bounce like he's swinging a '30s big band. Through it all, Bang's violin is nimble and quick, short and sharp, classically melodious and ominously dissonant, but always energized and coherent.

Just before the last track begins Bang and Fonda are heard joking with each other, and this glimpse into the studio serves as a fitting coda to a session brimming with empathic interplay. The players were loose, and the result is as tight a trio session as you're likely to hear.

Be Out S'cool; The Softness of Light; For Papa Jo, Klook & Philly Too; Tales from da Bronx; Song for My Mother; Coligno Battatta performed by Fab.