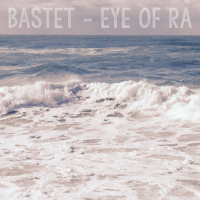 Billing themselves as "original modern West Coast Jazz," I half- hoped to see Shelly Manne and Bud Shank pop up amongst the credits on Bastet's debut album Eye of Ra. Alas, the music of this Bay Area-based quartet apparently has very little to do with the Los Angeles- based West Coast jazz scene that spawned such classics as Shank's Barefoot Adventure (Pacific Jazz Records, 1962) and Manne's The Gambit (Contemporary Records, 1958). Happily, though, Bastet's music is a winning combination of tightly-conceived compositions, effective and occasionally virtuosic execution, and understated joy.

It's funny, too, that the band's name—and even the album title—come at you from left field. One might assume that Bastet refers to some hip insider variant of "quartet" or "quintet." It doesn't. Turns out, Bastet is an ancient Egyptian deity; the goddess of cats, music, dance, and a few other nice things. Not coincidentally, she is also known as The Eye of Ra. None of the players in Bastet are familiar to me, though each are highly capable, sensitive types who do all of the little things that make their music work really well; like holding the cymbals at the end of a phrase to create an almost deafening silence, just for a moment.

On the surface, Bastet's music has sort of a mournful ECM-type sound, though the compositions—all written by guitarist Justin Rock—tend towards witty complexity and are quite a bit more involved than most of what you hear on that august label these days. Bands with a similar sort of work ethic and musical approach (albeit different instrumentation) would include SoCal habitues Slumgum, Canadian jazz-rockers Peripheral Vision, and Bill Frisell's 80s and 90s quartets. Not free jazz, not fusion, and definitely not smooth, Bastet's music is slyly and artfully composed and emphasizes sharp ensemble playing and an almost obsessive attention to detail that provides each soloist with an ever- changing backdrop to work from. And, though saxophone and guitar dominate, every member of Bastet gets to solo.

There's an unassuming charm and wry humor to much of Rock's composing that's Frisell-like, though he is a completely different sort of guitarist: hard-edged and percussive, not legato, with a clean, largely undistorted tone like Pat Martino or Jim Hall. Similarly, drummer Mike Quigg is not a fusion-obsessed basher, though he has plenty of chops and tends to dance around the backbeat like Bob Moses did in Gary Burton's band back in the day. Bassist Giulio Cetto sticks to the acoustic throughout Eye of Ra, imparting a jazzy warmth to Rock's largely backbeat-centric compositions. Tenor saxophonist Tim Lin is both an effective lead voice and a versatile and engaging soloist. His solo on "Above It All," for example, is in an emotive Michael Brecker-like bag, while he evokes Joe Lovano's all-over-the-horn approach during his spot on "Battles With Gravity."

Bastet also demonstrates an admirable stylistic range. Performed twice on this collection, the title track proves that the quartet can really wail in a swinging post-bop mode, while "Wallflower" and "Smoke and Mirrors" are free-ish ballads, "Sex Kitten" has a samba-derived rhythmic feel, and "In The Moonlight" goes right for that floating, mournful ECM sound. The remaining tunes straddle various jazz and jazz-rock styles in a nuanced way, mostly sounding pretty quirky in a post-modern 21st Century fashion. I especially enjoyed the proto-minimalistic compositional aspects of "In Violet;" both versions feature excellent drumming and Rock's most "out" soloing of the entire album. Much the same can be said of the lengthy "Battles With Gravity," which also has a really fetching, languid melody.

A surprisingly fine album from a dynamic young group with some great ideas and the chops to make music that has some staying power, even in today's insanely competitive and overpopulated jazz landscape.

Wallflower; In Violet; Smoke And Mirrors; In The Moonlight; Sex Kitten; Above It All; Eye Of Ra; Battles With Gravity; Eye Of Ra (take 2); In Violet (take 2).