By GLENN ASTARITA
February 17, 2015
Sign in to view read count 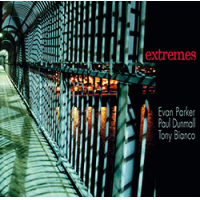 In the album notes, eminent drummer Tony Bianco advises that the various discourses of this program "were about the times we live in." It's a fitting correlation to the album moniker, featuring two legendary British improvisers, saxophonists Paul Dunmall and Evan Parker engaging in kinetic and at times, calamitous dialogues. Moreover, the Canadian label Red Toucan Records celebrates 20-years in business with its 50th release, fittingly provided by this powerhouse trio. The program sort of encapsulates the label's daring and leading-edge sphere of influence amid its diverse global roster of talent.

As one would anticipate, the two tenor sax titans go toe-to-toe and on the 32-minute opening track "Extreme," engage in an eddying and torrid series of interweaving contrasts where no stone is left unturned. Here and throughout, Bianco's flaming polyrhythmic patterns spawn a semblance of perhaps two or more drummers generating an extensive rhythmic plane. Indeed, the presentation boasts 'extreme' improvisational communications via the trio's relentless attack.

The musicians tone it down with probing lines and intimately crafted exchanges on the five and one-half minute "All Ways." Yet they rekindle the fire during the third and final extended work "Horus," where Bianco provides an effervescent backdrop with rolling toms flurries that assist with engineering a methodical upsurge. The saxophonists conjoin for more rapid-fire contrasts and create a colossal soundstage with weaving sentiment and flirtatious exchanges. They also duke it out with sweltering choruses and scalding call and response mechanisms. Ultimately, the instrumentalists' respective signature styles along with an energized game plan help ignite this raw and spirited improv fest into a festive no holds barred event.