By WALTER KOLOSKY
November 13, 2002
Sign in to view read count 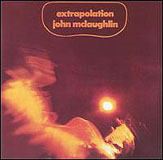 If you were looking for one John McLaughlin record you might play for a curious friend, this would be the one. Extrapolation was McLaughlin's first album release as a leader, and it sounds as fresh today as it did way back in 1969. From the opening strains of "Extrapolation" to the closing softness of "Peace Piece," this album presents a fine modern European jazz quartet in full charge of the sounds of their time.

Extrapolation features the under-appreciated John Surman on sax, Tony Oxley on drums and Brian Odges on bass. (Odges had just replaced Dave Holland, who was on his way to meet Miles in New York).

This quartet blazes through McLaughlin's JAZZ-blues-rock compositions and forms a hodge-podge of restless rhythms and irresistible hooks. Yet, despite its freeness (not meant in a strict jazz sense), Extrapolation is also quite cogent and thematic, as most tunes effortlessly run into each other. As always with McLaughlin, all of the players are allowed to excel and this makes for a very pleasing mix. Odges is surprisingly active and some even believe Surman steals the show. Oxley was a young star who never seemed to catch on in the States, but he remains a well-respected drummer in Europe.

Extrapolation also offers glimpses into the future. It presents the melody that would eventually become "Follow Your Heart." We discover "Arjen's Bag" (named after Dutch bassist Arjen Gorter) and "Pete the Poet." And don't forget about Binky. There is a bit of a beatnik sensibility to this album.

It would take the world 20 years to discover how truly timeless this album was. Extrapolation is definitely a jazz record. The great traditional jazz guitarist Joe Pass didn't have much interest in Mahavishnu John McLaughlin or fusion music. But someone played him this record once, and he commented that at least this guitarist (McLaughlin) knew how to play jazz. You think?

Extrapolation, It's Funny, Arjen's Bag, Pete The Poet, This is For Us To Share, Spectrum, Binky's Dream, Really You Know, Two For Two, Peace Piece.