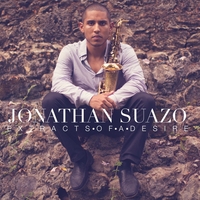 When it comes to currently-practicing Puerto Rican jazz icons, bassist Eddie Gomez and saxophonists Miguel Zenon and David Sanchez are the holy trinity. Each one of those men carved out their own respective path(s) through jazz country while retaining the essence of their homeland in their sound. For a young musician following in their footsteps to get an endorsement from any one of them is surely a good thing; when that individual gets two thumbs up from all three of them, it's a sign that greatness awaits.

Saxophonist Jonathan Suazo had the chance to hobnob with Sánchez and Gomez at the sessions for guitarist Gabriel Vicéns' Point In Time (Self Produced, 2012), on which they all play, while Zenon signed on to co-produce this debut recording. They all recognize the promise and passion that Suazo exudes, and those qualities are captured for all to hear on Extracts Of A Desire.

Three vastly different ideals—rhythmic agility, soaring grace, and barbed blowing—all merge under Suazo's mouthpiece. He's just as likely to knock a listener over with fearsome lines as he is to lull them into submission. Suazo's music exhibits episodic tendencies that engender surprise at every turn. Grooves come and go, rubato passages give way to strict time, and passive-aggressive tendencies surface at will. A free-firm duality exists in Suazo's work, but "free" shouldn't be mistaken for "out." Nothing is fully lacking in structural support or direction.

It could be said that Suazo was the lucky recipient of such praise from Zenon, Sánchez, and Gomez, but luck really has little to do with it. Suazo put in the time and continues to pay his dues as he climbs up the jazz ladder one rung at a time. His story may not be fully written yet, but those endorsements and this album serve as the preface for what could turn out to be a real page-turner.