By MARK CORROTO
August 9, 2009
Sign in to view read count 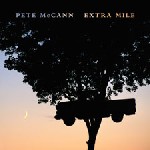 Since moving to New York in 1989, McCann has lent his skills to these diverse leaders, which shows his chameleon-like approach. He is equally comfortable playing pre- and post-bop jazz, as well as electric fusion, acoustic, Latin and rock—all of which are on display on his fourth solo album, Extra Mile.

After the seemingly effortless gentle swing of the opening "Fielder's Choice," McCann opens up his suitcase of sounds, playing Stevie Ray Vaughn-inspired licks juxtaposed against some spry acoustic wanderings. Each original composition on the release reveals more of McCann's many facets, none of which could have been accomplished without the support given by bassist Matt Clohesy and drummer Mark Ferber. Their glue holds the diverse meanderings together.

Employing guest players—such as saxophonist John O'Gallagher and pianist Henry Hey—allows McCann to branch in multiple directions. O'Gallagher walks lock step on the imperturbable title track and the burning blues of "Isosceles." Like McCann, the saxophonist has an eclectic ear, with far-ranging tastes but is never scattershot in his approach.

Hey shines throughout, but on "Rhodes Less Traveled" he is allowed to stretch out on the electric piano as McCann absolutely sizzles on guitar. Other stellar tracks include the fine guitar/bass acoustic duet "Pi," the retro-jazz-rock of "Angry Panda," and the urgent and very memorable Weather Report-electricity of "Stasis."

Pete McCann may try to fly under the radar, but his powers as a superhero guitarist are certainly revealed on this exceptional album.