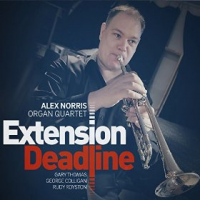 Extension Deadline isn't the first organ-based date that trumpeter Alex Norris put together. It is, however, the first one to see the light of day. In the liner notes for this satisfying quartet outing, Norris notes that he recorded an organ-centric record in the '90s, but that record was shelved. So it is with great satisfaction that he sees this record to its release on the BJU Records imprint.

While Norris has been a fixture on the scene for just over two decades, Extension Deadline is only his second recording as a leader, coming some fifteen years after his debut—A New Beginning (Fresh Sound New Talent, 2000). Here, he works with two old friends that go back to his formative days in Maryland—pianist-organist George Colligan and saxophonist Gary Thomas—and drummer Rudy Royston, a new friend who adds plenty of sparks to the proceedings. Together they tackle seven Norris originals, one Colligan tune ("Optimism"), and a classic from the pen of vibraphonist Bobby Hutcherson ("Little B's Poem").

This quartet cooks right out of the gate with the title track. Norris proves to be a liberal giver of solo space here and elsewhere, as everybody gets to shine. As the program continues, Norris and company tackle a quirky tune in seven ("What Happened Here?), trim things down to a flugelhorn-and-rhythm trio for a gently waltzing standard ("Little B's Poem"), and get down with some heady post-modern funk ("Where Angels Fear"). In every instance the music speaks clearly and intelligently, allowing for individual freedom of expression but never overstaying its welcome. With seven out of eight tunes falling in the five-to-seven minute range, Norris and company manage to keep things concise while still finding time to show-and-tell via solos. Royston's tightly wound drumming, Colligan's supportive and endlessly creative organ work, and the well-synced horns of Norris and Thomas prove to be a formula for success.