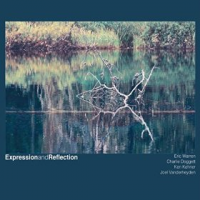 As you might think, there are rare recordings possibly better experienced sans lights—and ExpressionandReflection certainly might be one of them. That's definitely not to say that hearing this excellent offering loses anything in broad daylight. Far from it; while it's not a concept outing as its title might imply, ExpressionandReflection dishes up a contemplative quality that might waft into one's senses even better when lights are low.

With ExpressionandReflectionSt. Louis-based bassist and composer, Eric Warren leads a superb quartet across ten neatly-performed and highly-textured selections of which seven emanate from his talented pen. The performers here, while not necessarily household names, individually and collectively distinguish themselves as worthy of world-class distinction.

With pulse-pounding bass beats and droning undercurrents, "Scott's Tune" kicks off the date with Warren's bass and Kehner's funky keyboard joining in before Joel Vanderheyden's boss tenor wails away swinging on the bluesy head. Nino Rota's "Michael's Theme" from The Godfather (Paramount Pictures, 1973)gets a darker treatment with Vanderheyden's solemn tenor working his horn's dynamic spectrum to the melancholic max. "Anthem" lets Kehner introduce the theme in a classical style—a la Lalo Schifrin -over a Latin-feel rhythmic bed.

Warren's originals are thought-provoking, inventive and never saccharine. They provide a superb platform for extended soloing. And, each soloist here, including Warren, plays with significant flair, enthusiasm and elegant restraint. The creative cohesiveness between Warren's crew is outstanding ("Waltz"). "Mr. Jarrett" is a quirky boogaloo snippet which shades the old Blood, Sweat and Tears' hit "Spinning Wheel." Well-performed, it's not as intriguing as the rest of the selections. "The Girl" is a dreamy, wistful tune with pianist Kehner making initial and solo statements. Warren's bass and Doggett's tasteful rhythms support here beautifully. "Love Thy Neighbor" speeds things up with a Middle Eastern flair. Vanderheyden, Kehner and Warren slink through the melody with Doggett percussing his way under neatly. "Bittersweet" is a gorgeous rendition of Don Sebesky's ballad gem where both Vanderheyden and Kehner shine expressively. The traditional classic, "Poor Wayfaring Stranger," here complete with synth strings, ends this terrific musical journey.

One won't need TV's "Clapper" to enjoy ExpressionandReflection in the dark. However, rest assured after hearing it, there will be plenty of applause.