By ALAIN LONDES
February 23, 2008
Sign in to view read count 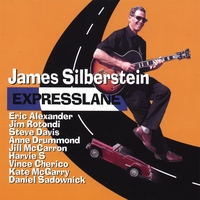 Composer/songwriter Cole Porter's "From This Moment On" fires up talented guitarist James Silberstein's second album, Express Lane. The up-tempo rendition of this classic brings in a full and dynamic band for this project, including topnotch members of the well-known New York-based collective, One For All: trumpeter Jim Rotondi, tenor saxophonist Eric Alexander and saxophonist Steve Davis.

Silberstein plays with a virtuosity reminiscent of Joe Pass, Pat Martino, and Martin Taylor. Whether in a trio, quartet, or larger formation, his punctuated contributions are clearly evident. All scenarios are effectively showcased on this CD.

Following Song for Micaela (CAP, 2004), the guitarist felt encouraged to do another project, with Express Lane sounding consistently engaging and fresher than ever. Bassist Harvie S, drummer Vince Cherico and keyboardist Jill McCarron had been rehearsing with Silberstein, and played a number of gigs together. Silberstein felt that this cohesive core would work for his second project and, after bringing in this depth of talent, the recording took place over three days.

Silberstein felt that his original, "Express Lane," would be the right choice for the title—an up-tempo tune with a catchy name. It was S' idea to play Arlen and Mercer's "Come Rain or Shine" with the meter shifting smoothly from 4/4 to 6/8, with a soloist cutting in before the switch.

A bluesy bass-guitar dialogue opens guitar master Jack Wilkins' "Kiwi Bird" before Anne Drummond's flute and Rotondi's muted trumpet add a classical fugue touch. By contributing the concept of a classical sounding bridge, S once again leaves his mark. The bassist's bow provides a deep context to the melody of "You Don't Know What Love Is" before shifting to a comfortable Cha Cha groove.

The standards bookend original tunes by Silberstein and S—either individually or collectively. The bassist brings a strong penchant for Latin textures on tunes including the evocative "Shadows," where he wrote the intro and helped develop the rest of the tune. Silberstein recruits Kate McGarry, who doubles Drummond's flute with a couple of brief wordless vocals. The Latin-based "Glass Garden," said to evoke Hancock's "Maiden Voyage," includes key solos by Rotondi, McCarron, Silberstein, and Alexander.

Silberstein shows his Joe Pass style on a mellow trio rendition of the Rodgers and Hart show tune "My Romance." A subtle yet deliberate bossa nova rhythm leads Hoagy Carmichael's "Skylark" while remaining true to the melody. Silberstein and McCarron provide key solos within the spirit of the Latin feel, with solid bass and drums completing the groundwork on this catchy rendition.

The recording ends quietly with a mellow rendition of Silberstein solo on J.J. Johnson's "Lament."