By GLENN ASTARITA
October 23, 2018
Sign in to view read count 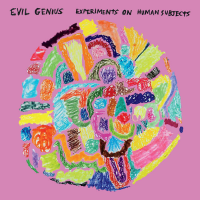 It would be an uplifting experience to see this trio go at it in a live setting. For those who need comparisons, think of a cross-pollination between some of John Zorn-produced kinetic avant-garde jazz fusion, psych and rock ensembles along with Frank Zappa influences, and punk jazz groups.

Guitarist Max Kutner is the lead guitarist of the Magic Band, performing the music of Captain Beefheart while also working with renegade guitarist Henry Kaiser, trumpeter Dan Rosenboom and the Grandmothers of Invention with former Mothers alumni, keyboardist Don Preston, vocalist Napoleon Murphy Brock and other notables. It's easy to discern that the artists intimate a parallel to the '"other side" of jazz due to their guerrilla tactics, byzantine time signatures and in-your-face disposition.

Tuba performer Stefan Kac (Milo Fine, Jon Armstrong, Hammerstein) handles the lower-end of the musical spectrum, while drummer/percussionist Michael "Bonepocket" Lockwood (Atomic Ape, Deradoorian, Matt Kivel) generates the foot-stomping grooves, polyrhythmic fills, fractured funk and free-form blowout cadences. Even though the trio glides through difficult unison runs, it does its darnedest to create an open forum. At times, it's jazz fusion with blood and guts via off-centered phrasings, complete with Kutner's rip-roaring guitar licks and Kac's amazing dexterity as a foil and accompanist. And when things get kind of crazy and rambunctious, the musicians often revert back to fast-paced progressions amid linear motifs channeled through numerous reconfigurations of a given melody or tempo.

"Asterisk" is an angst-laden avant-garde jam featuring Kutner's slick picking and closed-hand techniques, along with Lockwood's pummeling rolls. Here, they signal an emergency of some sort, with no relief in sight. Otherwise, the surprises keep stacking up as the album progresses. Indeed, it's an exhilarating presentation, further escalated on "Whole Wheat Heroes," where Kutner's reverse chord maneuvers are formed and altered with swarming cymbals, crunching hard rock riffs, ballsy choruses and devious slants on previously stated hooks. The trio imparts lucid imagery of anarchy and insurrection akin to mad scientists—not abiding by codes, rules or best practices —by arbitrarily experimenting on humans' aural networks. It's all in good fun and wildly entertaining.