But this is more than a textbook. It's really a way for anyone who is an 'active listener' to move from a general appreciation to a systematic in-depth awareness of the spectrum of jazz styles. 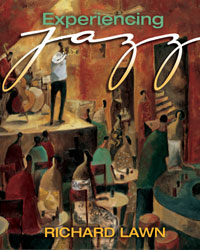 Newly published, Experiencing Jazz, by Richard J. Lawn, is a multimedia textbook with an accompanying CD-ROM, an online learning center for students and instructors, and an optional CD containing complete music tracks. The book covers all aspects of jazz from its inception to the present day, in a highly organized learning format with illustrations, photos, music and interview excerpts, self-tests, time lines, and information about the historical and cultural context of each major era. It is an erudite, lucid and comprehensive volume that will serve as an excellent text and teaching tool for courses in jazz, jazz history and related subjects at the advanced high school, undergraduate and graduate levels. Superbly crafted, it is likely to quickly become the definitive textbook in its field.

For students, it is user-friendly. It requires good reading ability, a basic knowledge of musical notation and the most rudimentary computer skills. It is objective, clear and well-organized, providing a wealth of knowledge and a virtual rose garden of audio and visual experiences that will draw the student into the learning process. It speaks to all levels of musical knowledge, and musicians themselves will "dig it, because it is written from an insider's perspective. Mr. Lawn, in addition to being Dean of the College of Performing Arts at the University of the Arts in Philadelphia, is a seasoned jazz musician (saxophone and composition), and he has done meticulous research to complement his first hand knowledge of the subject matter.

But this is far more than a textbook. It's really a way for anyone who, in the book's own words, is an "active listener (someone who takes jazz seriously and strives to hear the nuances), to move from a general appreciation to a systematic in-depth awareness of the spectrum of jazz styles—from its African and Southern roots to the so-called "post-modern era. What Lawn's book affords is a coherent overview of the evolution of jazz and the nature of its musical idioms, as well as a frame of reference from which to grasp new knowledge and listening experiences. And it gives it in the "right way—respectful of the music and the musicians, yet with the colorfulness, spontaneity and joy which are characteristic of jazz itself.

For example, most people who have heard trumpeter Miles Davis' music will recognise Davis as one of the great musical forces in modern jazz—with Kind Of Blue (Columbia, 1959) and his collaboration with Gil Evans on Sketches Of Spain (Columbia, 1960) among the greatest "milestone jazz recordings of the twentieth century. You hear the anecdotes about Davis and you know something about his life story. But what you derive from Experiencing Jazz is a clear idea of Davis' musical evolution, his specific contributions to improvisation, sound and styles, his precursors, his spheres of influence, and the membership and approaches of his various groups.

And you learn all this in an exciting way—via audio excerpts of saxophonist Cannonball Adderley, Gil Evans and Davis himself discussing his music. The book provides a way to organize one's knowledge and fill in some crucial gaps, whether about early African influences, swing bands, bebop, free jazz or other subjects.

Even though their respective formats differ, a comparison is apt between this volume and Ken Burns' PBS TV Series: Jazz: A History Of America's Music. Both offer a running history of jazz and its cultural context. Both strive to articulate the essence of jazz—an essence as simple as tapping your foot yet eternally elusive. Burns' efforts were aimed at a wider audience than Lawn's book. And the Burns series represents intelligent entertainment rather than education as such, so it is of course not as nuanced and detailed. Both are monumental "big picture surveys of jazz and the world which evolved along with it.

In some ways, Burns' TV series achieves the status of a great film documentary. It energizes the viewer and generates a rich appreciation of the music and the musicians. It is exciting and captures the tenor of the times. Yet many musicians are less than enthusiastic about it. Why? Primarily because it is fundamentally about a period in American history and not about the music itself. As a result, Burns' series gives short shrift to many key players and glorifies the famous few. By contrast, Lawn's book is always about the music itself. The history is given importance in so far as it elucidates and informs the music and its meaning.

As a result, Lawn offers a more measured and balanced view than Burns, giving equal weight to the traditional, the modern, and the contemporary eras, and fully acknowledging lesser known innovators such as bandleader Fletcher Henderson, bassist Gene Ramey, pianists Bobby Timmons and Lennie Tristano, and many more, along with the famous and popular performers in the pantheon. As a result, musicians as well as the "in crowd will appreciate Lawn's efforts very much. Some will regret, however, that their favorites receive little or no mention in an otherwise comprehensive book. I suspect that creating a book such as this requires some inevitably painful omissions and deletions to prevent it from becoming unwieldy. But no one is likely to approve of all the choices and emphases.

Despite such shortcomings, Experiencing Jazz is a monumental achievement. In addition to reaching the educational market, it should be offered for sale to jazz fans via nightclubs, concert halls, book stores and internet vendors so that the fans can "get with it knowledge-wise. My one regret is that the audio interview excerpts on the CD-ROM are much too brief, and it would be fascinating to hear the full interviews from which they were taken. On the whole, however, nothing but praise and gratitude can be offered to Richard Lawn for a magnificent contribution to jazz education and scholarship.

As a post-script, I would add a caveat that, as the Zen Buddhists say, there is considerable merit in "non-understanding and approaching jazz with an "empty mind, a "beginner's mind. The experience of hearing a great musician or group for the first time and being hit in the head with what they are doing and sounding like is much more rewarding than any musical guide can convey. But it is a merit of Lawn's book that he doesn't over-educate you or load you up with useless facts. Rather, he gives you the kind of information that generates excitement and insight when you hear the music. The essence of jazz is spontaneity. As the back cover quote from Miles Davis says, "I'll play it first and tell you what it is later.