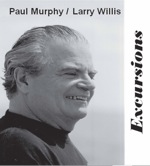 Hidden away on small unknown labels is music that needs to be heard. A case in point is Excursions, featuring pianist Larry Willis and percussionist Paul Murphy.

This music evokes no largesse, only thoughtfulness and solace. Abstraction is not as much the focus in this music as it is a concise, direct delivery of fluid musical notions that seem to be right at the tips of the fingers of these two musicians. Over the course of their long careers, Willis and Murphy have played with some of the most renowned jazz artists. On their duo record, their prowess provides a refreshing approach to create a conversation that shows no pressure to go beyond the pristine limits that the recording provides.

The introductory track, "A Prayer for All Ages," is enough to fully embrace the listener and paint an ever-flowing picture of pianistic diversification down to the trill that bridges one series of chordal progressions to another. The simple accompaniment with the trap set supports the gradual crescendo/decrescendo that melts into a strong restatement of the musical purpose to drop into a pensive close.

The pieces that follow perform the same kind of embracing, flavored with a minor key component that seems to throw a question mark—not into the clarity of the music, but into the nature of the message.

The only composition not by Willis and Murphy is Gershwin's "My Man"s Gone Now." The rendition from these two is foreboding and rattles the bones. There is seemingly no moment when Willis' fingers come off the keys until the end when he alights the treble with a peek at hope. But the left-hand trill that perpetuates a more-than-blues quality lends heavy heartedness and sadness to Gershwin's standard. And in the end, the left hand is all that repeatedly speaks.

Murphy takes off on a lengthy solo for the title composition. His motion is swift and tight, going between snare and cymbal, bolstered by an occasional bass drum beat. The piece closes with a fast hi-hat clap that rolls over quickly into "Ostinato." The tom resonates, changing the vibration texture that becomes the groundwork for the piano to enter and proceed carefully, sometimes dissonantly, and ponderously towards a swell where Willis breaks open to formulate series of varying repeated phrases that branch out, exercising the entire keyboard, and return to strengthen the integrity of the composition.

In fact, the integrity of the entire recording is unquestionable. The desire of the two musicians to keep within the parameters of muted-ness shows through and presents an edge to the playing that qualifies this music as non-explosive. The listener can go no further than the sound allows.