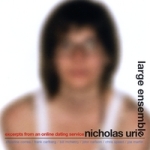 Youthfully precocious composer/conductor Nicholas Urie was born in Los Angeles in 1985. He began winning jazz composition awards when he was 17 years old and studied composition with Bob Brookmeyer, then graduating from the New England Conservatory of Music with a master's degree.

Urie uses the prewar Berlin Cabaret as the stylistic vehicle for carrying the ribald and carnal pheromonic texts. "Yes I have a picture you might like/In it I'm banging my ex-wife" informs from "About Me," while "You're like that first hit of crack/that first spike of smack" metaphorically signals a gang lament in "Wayne."

Urie takes these most unpoetic poems and fashions them for the bold plasticity of Christine Correa's voice. His 16-piece "Large Ensemble" (which includes Michael Christianson's tuba) creates a ready Kurt Weill groove. Ute Lemper should have sounded so good. The presence of clarinetist Chris Speed is fully employed on the final two pieces, providing a sharp counterpoint to the bright brass Urie favors.

Excerpts From an Online Dating Service is very well conceived. Jazz (or any genre, for that matter) has never seen such adaptation. Writing music to surround such difficult text is a feather in Urie's cap. Making it so immediately accessible and entertaining is a mark of the young composer's genius.

Big band music has never veered so far from its swing roots as it does on this recording. Urie does not simply blow off the dust of the large jazz ensemble, he sandblasts it off with Uranium.