John Escreet: Exception To The Rule

By MARK CORROTO
November 14, 2011
Sign in to view read count 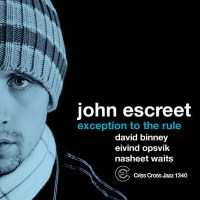 The highest compliment that might be paid to pianist John Escreet is that he has a restless mind. It is not that the music on Exception To The Rule is troubled or uptight; it's just that his modus operandi is one of extreme opposites. He composes tight counterpoint and swift changing intervals for his bands to perform, filling his scores full of notes, or writes a simple piece that is significant, not for the notes played, but for the sounds generated.

The Brit-turned-New Yorker is an admirer of the legacy of pianists Paul Bley, Andrew Hill and Cecil Taylor. He synthesizes their influence, much like his mentor, Jason Moran, mixing freedom with tightly composed passages that aggressively push an intellectual agenda that swings its ass off.

This disc, his first for the Dutch label (although he can be found on David Binney's Aliso (Criss Cross, 2010)), follows The Age We Live In (Mythology, 2011) and Don't Fight The Inevitable (Mythology, 2010). Escreet's musical partner throughout these recordings is saxophonist Binney, a modernist whose inside/outside playing flows from the intricate opening title track—executed almost as a warning shot—to the electronic sound designs of "Redeye" and "Electrotherapy," which could almost be considered minimalist undertakings.

Escreet moves well within the modern Brooklyn landscape, playing with drummers Tyshawn Sorey, Marcus Gilmore and, here, Nasheet Waits. Waits and bassist Eivind Opsvik switch from the precise and groove-laden "The Water Is Tasting Worse" to the open-ended improvisation of "They Can See" with such nonchalance that the variation is quite natural. Pulling these disparate approaches together, the pianist forges a sound that is best summed up on the final track, "Wayne's World." The composition begins with bits of chamber sounds, then onto some angular angst speed-jazz, only to unfold into groove-driven melody. Escreet delivers his anthem to modernity, making the difficult passages come off with ease and blending the disparate parts into one edgy soup.