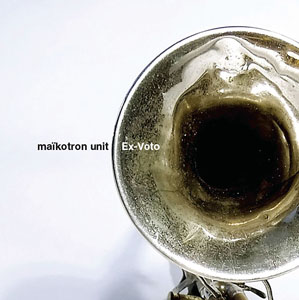 The maïkotron is the cornerstone for the music of the Maïkotron Unit. It's an odd looking instrument with its valves and keys, but is capable of producing the microtones which are perfect for the music of this trio. Ex-Voto, its seventh album, was inspired by the paintings of drummer Michel Lambert. His art also gives the CD sleeve its resplendent hue.

The trio is dedicated to New Music, an apt term that encompasses classical music, jazz and swing, which they cloak in harmonic richness. The result is effectively beautiful and utterly compelling.

The music was recorded in two churches: Saint Jean-Baptiste and Saint Michel de Bellechasse. There may have been some divine inspiration, but the empathy between the musicians stems from the 26 years they have been together.

A peaceful, easy feeling descends from Michel Cote's bass clarinet on "Hiems." His soft shades are abetted by bassist Pierre Coté's gentle arco, as Lambert cuts across the linearity with a cross-rhythm of fluttering accents and shading on the cymbals. It's short and to the point, the impression made in just over two minutes.

"Bibebatur" possesses quite a different groove. Bouncy and vibrant, it sparkles, with Pierre Coté working a deliciously captivating soprano saxophone line while the other Coté sets up a walking bass line. Lambert once again adds his potent dynamics without overheating the pot.

If these two tracks were compact in their approach to composition, "Votivae Noctes" expands the album's boundaries. The bass clarinet sets up the rumination, using time and space to advantage, while the maïkotron adds to the lure as it becomes both the complement and the foil. Form is opened for free motifs, the pulse and tempo made taut and loosened. A folk melody is ushered into this, fitting into the logic of the scale of this wonderfully inventive tune.

The music is filled with rich detail, the message for each coming from the soul. It is deeply felt and conveyed, making this an experience that can be cherished for a very long time.