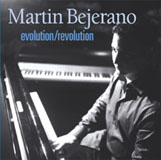 Pianist Martin Bejerano has played with an impressive list of musicians, including Kenny Garrett, James Moody and Jimmy Heath. Roy Haynes and Russell Malone have him in their bands. Evolution/Revolution is Bejerano's first CD as leader, and it is easy to see why he has found wide favor.

Bejerano crystallizes his ideas succinctly, and tempers his drive with a clear vision. His harmonic strengths serve him well. He can also write a pretty good tune. Four are included here along with takes on Miles Davis, Bud Powell and Thelonious Monk.

Blues Evolution, a lilting tune with a classical air imbuing it, is the perfect opener. It shows his skills at settling into a fast groove and manipulating it. His fleet-fingered excursions soak into the melody and then take it out in a delightful flow. He does rein it in a bit without any ruffles before he gets back with a run of sparkling notes. He bookends the CD with "Blues Revolution, completing his journey with the blues running like a river through the land of bop.

Bejerano shows his playful side as he interprets "Monk's Dream with a sly sense of humor. There are constant shifts and breaks in the linearity as he jumps into a whirling groove, adding a whiff of a Middle Eastern melody and showing that he is no slouch with his imagination, as he pushes the song along with well-defined direction.

Bejerano convincingly proves that he is adept at conveying emotion on a slower tune as he essays "You Don't Know What Love Is with a delicate touch and cool lyricism. He never strays far from the core, content to add soft shades and a warm glow.

It would be amiss not to mention drummer Ludwig Afonso and bassist Edward Perez, who work in close consonance with Bejerano, helping give each tune a distinct character.