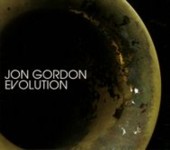 Evolution, from saxophonist and composer, Jon Gordon, is a fine record. It sparkles with mature ideas, unbridled creativity, and soul-searching profundity. There is also polished musicianship throughout. This is where the special quality of the music of this record lies—that it is not just built on an ediface of ideas suggested by its title, but on the superb development and delivery of these through an extravagantly aural suite. To that extent this work is not unlike some others including the John Hollenbeck Large Ensemble Eternal Interlude (Sunnyside Records, 2009) or even George Russell much earlier, African Game (Blue Note, 1986), albeit on a relatively smaller scale.

Essentially, though, like those other landmark recordings, this one too is a kind of "Book of Ways." Its composer and musicians posit that the only constant in life is change. Although almost completely composed throughout, the music, is largely played in an idiom best suited deliver such a message—jazz. As it progresses the music spins interminably and even elastically turning over harmonically several times before it concludes in an explosive crescendo. That instruments, specifically the three sets of strings, usually associated with chamber music are added on some tracks in no way interferes with the inherent swing of the performance.

The start of the record is spiritual: "Prelude" is subtitled "Grace." This short overture is somber, sways gently, proferring balance for "Evolution," which follows immediately. The strings continue to provide occasional accents to this piece, central to the whole record. The music undulates with contrapuntal, inward looking sections. Gordon's alto saxophone solo emerges about 2m 48s into the piece, from behind a bleating bass clarinet, moaning trombone, and ponderous strings. Navigating peaks and troughs in expressive harmonics about 2 minutes later in a stark fading note, Gordon hands over to pianist, Sean Wayland who makes sparkling runs and arpeggios, developing the evolution until the ensemble returns toward the end, to leave the piece somewhat hanging on a minor chord, with good reason.

"Currents," "Bloom," "Contemplation," and "Veil" are all thematically and sonically connected individual works. It is still all about change, and the score continues to be somber, stiriring and yet radiant. A certain kinetic energy emboldens the music throughout. Though evenly expressed the ensemble does leave ample room for a "breakout" of sorts. "Currents" features a splendid trombone solo by Alan Ferber The trombonist is critical to the composition, but sadly, he does not solo more than just twice. His instrument is the most human speechlike of all—and despite Kristin Berardi's fine vocals—would have added exponentially to the music.

"Shane" and "One for Liam" (brilliant solos including those by pianist Bill Charlap) are portraits of Gordon's children, a step in the evolution of "self" and thus key to this suite. This culmination is majestically expressed in "Individuation," from its superb bass clarinet intro and trombone counterpoint to the dramatic conclusion of this work.