By C. ANDREW HOVAN
September 18, 2014
Sign in to view read count
If you are a Blue Note fan, you undoubtedly know that over the course of their 75th anniversary year Blue Note has been reissuing important titles from the catalog at a rate of about five albums per month. It is really a fast-paced program that will appeal to folks on many levels. Some might be starting out and looking for their first copies of these iconic albums, while more seasoned collectors might be looking to fill in gaps in their collection. But one thing is certain, at about twenty bucks a pop, none but the wealthiest of collectors will be able to buy all 100 titles by the time the whole program wraps up at well into 2015.

Another thing has been fairly certain since the series debuted back in the spring; many in the audiophile community have been quite put off by the fact that these albums are being mastered from digital sources. Nonetheless, if you can believe the credits, the various titles have been remastered by Bernie Grundman and Alan Yoshida. Now, certainly few audiophiles would smirk at these gentlemen's credentials, but the controversy continues. In the end, a case by case evaluation is really more apropos as opposed to a blanket condemnation.

Blue Note head honcho Don Was has said that he and the engineers spent many hours tweaking to get these reissues to sound like the originals. In the final analysis, it is up to each listener to decide if they succeeded based on their own experiences with the music. And for this reviewer, some titles score high, while others somehow just miss the mark. 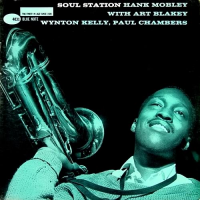 Even the titles chosen for the golden 100 have been hotly debated, but few would argue with the inclusion of tenor saxophonist Hank Mobley's Soul Station. This 1960 date features one of Mobley's finest efforts in an especially gratifying quartet mode. Wynton Kelly, Paul Chambers, and Art Blakey work hand in glove to support their leading man and the results are nothing short of invigorating. Mobley had a knack for writing great charts and one of his best known pieces, "This I Dig of You," is featured here.

Engineer Rudy Van Gelder manages to capture Mobley's distinctively round tone in the same way an artisan cuts and polishes the finest diamonds. Blakey's drums are thunderous in their impact, while Kelly's piano sparkles. Now this version certainly doesn't match the visceral punch of the Audio Wave XRCD, the best sounding edition of this music currently available. Nonetheless, there was nary a touch of digital iciness and the overall warmth was registered clearly on this very quiet pressing. 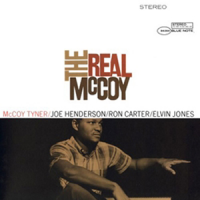 It was not to be a common occurrence, but on a few occasions, tenor man Joe Henderson had the chance to team up with drummer Elvin Jones. The mighty force behind John Coltrane's incendiary quartet at the time, Jones had a thing for tenor players and excelled at his encounters with Wayne Shorter and Henderson over at Blue Note. For his 1967 debut for the label, McCoy Tyner teamed up with Joe and Elvin, (Ron Carter completed the quartet) and the outstanding The Real McCoy was the result.

There's something to be said for the crystalline approach of Tyner, not to mention the dark timbre of Elvin's ride cymbal. Both of these characteristics are rendered very cleanly, making this reissue a rewarding one indeed. From the yearning "Contemplation" to the Monk inspired "Four By Five," Tyner's distinctive originals offer heady fodder for improvisation and the five pieces flow seamlessly from one to the next. Here again, the pressing was quiet and without flaws.

Starting with his first session as a leader for Blue Note in the fall of 1960 and ending with a live recording in 1972 at The Lighthouse in California, Grant Green covered a considerable amount of ground in his dates as a leader for the label, not to mention his many appearances as a sideman. There were organ combos, Latin-tinged experiments, and even pianoless trios along the way, making Green one of the label's most diverse and flexible artists.

Even among this great body of work, Green aficionados often cite Idle Moments as one of the guitarist's most memorable efforts. No doubt, much of the credit must go to the gentlemen on hand to help Green in this endeavor. As a contrast to Joe Henderson's own extroverted excursions, he plays quite a different role here, his smoldering lines giving the session a hint of afterglow. Bobby Hutcherson's vibes contrast nicely with Green's guitar, while Duke Pearson finds the right chords and voices his lines to complement those of Green and Hutcherson.

The title track might just be one the most relaxed numbers in the Blue Note cannon, crawling along at what drummer Kenny Washington calls "the adult tempo." Along the way, each lead voice speaks at length and the results are worthy of goose bumps. The sextet also tackles John Lewis's "Django" and manages to update the line in one of the best versions this side of the MJQ. Only Green's "Jean De Fleur" manages to clip along at an accelerated pace, but then this is music for late night listening and it excels at that without fail. Unfortunately, my review pressing was quite noisy and even managed to skip at one point, making this issue a definite disappointment. 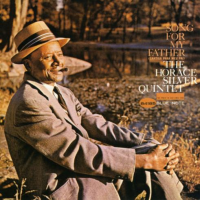 Horace Silver
Song For My Father
1965

Lastly, we come to an album so iconic that an overly verbose description seems merely redundant at this point in time. Horace Silver, like Green, had a healthy run at Blue Note staying through the '50s, '60s, and until the end of the'70s. By far his most popular album continues to be Song For My Father. Somewhat of a transitional affair, Silver was concluding a successfully run with a quintet that included Blue Mitchell, Junior Cook, Gene Taylor, and Roy Brooks. This is the group heard on two of the six numbers. Elsewhere, Silver ushers in the new breed featuring Carmell Jones, Joe Henderson and the powerhouse drummer Roger Humphries.

The title track kicks off with a four-note riff sustained by a piquant bossa beat, Henderson's solo creating such momentum that he throws off the band at one point, his solo requiring a few more bars of vamping to aid in the cool down. "Calcutta Cutie" speaks with an exotic tongue, aided and abetted by Roy Brooks' muffled finger cymbals. Henderson's "The Kicker, the one non-Silver original, is the flag-waver of the set, bristling with excitement and Humphries insurgent ride beat.

While the pressing of this session played without flaws, the overall sound was rather dull and lifeless. A quick comparison was made with the Direct Metal Mastered reissue from 1985 and the differences were quite noticeable. With the DMM pressing, a sliver more range in the top end added just the right touch of brightness that seemed to be missing from the new pressing. There also seemed to be a deeper soundstage that added to a more profound sense of presence.

Tracks: Remember; This I Dig of You; Dig Dis; Split Feelin's; Soul Station; If I Should Lose You.

Song for My Father