The Susan Krebs Band: Everything Must Change 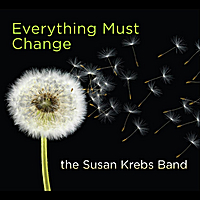 Appraising a jazz singer, male or female, is never easy; there are so many variables to consider. First, of course, is the voice, which must be lucid and pleasing to the ears. Respect for a lyric is important, as is articulation, which is bound closely to emotion; too little can be seen as tedious, too much as contrived. This, apart from choice of material, blending of tempo and mood, and the size and composition of the singer's backup group. When all of those pieces—and more—blend seamlessly together, the inevitable result is a memorable recording.

On Everything Must Change, the third album to date by singer Susan Krebs and her band, some parts fit together neatly, others somewhat less so. As Krebs's name is on the marquee and her bio is impressive, a few words about her are in order. Before moving to Los Angeles several years ago, Krebs began her career as an actress/singer in off-Broadway plays and musicals while performing with the improvisational theatre company War Babies. She has acted on television, in films, in radio and TV commercials, headlined her own solo musical revue and performed in a contemporary opera. Jazz singing was always close to her heart, and she studied with Sue Raney and Sheila Jordan. As a vocalist, Krebs has a warm, midrange and slightly husky voice that rests easily on the ear, and her lyric approach is pleasingly ingenuous and informal.

Krebs earns high marks for choosing compatible teammates (the band is superb) and for going out of her way to unearth songs that have not been overdone, either by jazz singers or anyone else. Alas, when songs are so seldom performed it's usually for good reason, and what should have been one of the album's strengths is actually a weakness. The opener, Freddie Hubbard's "Up Jumped Spring," is splendid—as an instrumental—and Abbey Lincoln's modest lyrics add little to the song's innate charm. Kurt Weill's "Lost in the Stars" and Billy Strayhorn's "A Flower Is a Lovesome Thing" (is "lovesome" really a word?) are similarly unimpressive, while Dave Frishberg's "Wheelers & Dealers" and "Our Love Rolls On" are by no means among his more memorable themes.

That leaves Cole Porter's "What Is This Thing Called Love" (passable), Bernard Ighner's "Everything Must Change" (the album's most engaging number) and the ambiguous finale, "Are Ya Havin' Any Fun?," which raises the question of tempo and mood (it meanders far too slowly, and what is meant to be playful sounds contrived).

Even though some of the songs may be less than inspiring, Krebs brings out the best in them, and Things Must Change is worth hearing for her talents and those of her first-rate band.

Up Jumped Spring; What Is This Thing Called Love; A Flower Is a Lovesome Thing; Everything Must Change; Lost in the Stars; Wheelers & Dealers; Our Love Rolls On; Are Ya Havin; Any Fun?