By WILBUR MACKENZIE
September 4, 2009
Sign in to view read count 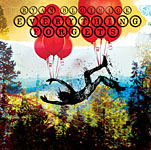 Guitarist Ryan Blotnick has been intermittently active in New York for years now, but since the release of his debut recording as a leader, Music Needs You, his activities have taken him throughout the world, with his own groups and also with Michael Blake, Pete Robbins and Kresten Osgood.

Blotnick's second record, Everything Forgets, travels through a wide array of textures, moods and atmospheres, at one moment careening through a dense cloud of rhythms, then gliding through a garden of relaxed melodicism. Tracks recorded by two distinct bands are spread out evenly throughout the record. There is a constant sense of mindfulness towards pacing and meaningful juxtaposition, however, and the smoothness of the transitions attests to both Blotnick's versatility as an improviser and clarity as a composer and bandleader.

The second is the rhythm section from Blotnick's first CD: bassist Perry Wortman and drummer Joe Smith. The trio covers the lion's share of Blotnick's beautiful jazz compositions, offering contrasting takes on "Mainstream" and the country-inspired waltz "Ned Ferm." The trio setting offers plenty of room for effusive dialogue, which is particularly noteworthy during the dark ruminations of "Judge's Cave."

Blotnick is a consummate artist. He compiles his well-honed skills in various forms of music to serve as a springboard from which to search constantly for new paths and forms of expression.