Greg Chako: Everybody's Got A Name 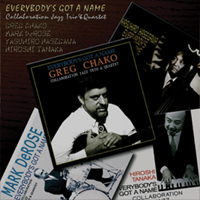 Greg Chako
Everybody's Got A Name
Self Published
2008

Guitarist and composer Greg Chako is the consummate musician who, despite personal hardships in his life, dedicates himself to the art of jazz with every fiber of his being, producing one fine album after another. Everybody's Got a Name is his ninth album overall, and fourth in a little over a two-year period. The music contained in his previous releases explored the expressive side of his creative compositions, and helped establish Chako as a master guitarist. With only three standards on the program, the majority of the music presented on Everybody's Got a Name features original compositions and arrangements.

As good as past recordings were, this work is perhaps Chako's best release yet, and offers a slight jab at critics—with this reviewer included—who were among those that suggested he record with "name" players to get more recognition. As he writes in the liner notes, "this CD's whole concept is my humorous way to respond to critics who over-emphasize 'name' recognition at the expense of listening fairly with open ears and mind. After all, everybody's got a name." Touchï, Mr. Chako, you are absolutely right; for the players here are phenomenal in their own right, and do indeed deserve to be taken seriously.

Just one listen to this album will be enough from which to draw a conclusion that what you've heard is nothing less than outstanding, and the players who perform here are excellent. Chako's Collaboration Jazz Quartet pairs two Americans and two Japanese musicians forming a tight combo that play well off each other. Both drummer Mark Derose and pianist Hiroshi Tanaka have performed with Chako in the past, while bassist Yasuhiro Hasegawa joined the group upon the recommendation from a fellow musician.

Chako has always had an affinity for the Latin and Brazilian sounds, and includes a fair share of the genres here; beginning with the ten-minute title tune, which he states "is a driving Latin-jazz style with a complicated syncopated section that challenges our ensemble." Aside from Chako, Tanaka's play on the piano and Derose's drumming are simply marvelous here. There is the bossa-shaded "The Lamp Is Low," an absolutely beautiful melody featuring Derose playing the drums and percussion at the same time, as Chako peels off romantic, light and mellow chords.

The Brazilian flavor continues on one of Chako's favorite Jobim compositions, the percussive "Felicidade." There is also a good measure of bop on the repertoire, represented by the opening Boppin' at Berlitz" and "Bop-n Swing Thing," inspired by Charlie Parker's bebop. "Apache Junction" showcases Chako's guitar style, which has often been compared to that of the great Wes Montgomery.

One of the slow, light ballads not to be missed is a new rendition of George Benson's wonderful "Mimosa," featuring a sensitive bass solo and light shaker/triangle percussion. The album ends with Cole Porter's "From This Moment On," a favorite of the guitarist taken from a previous recording.

Greg Chako is a purist on the guitar, evolving his play to a higher plane with every new album. Everybody's Got a Name features Chako's sophisticated, cool guitar work in combination with a superb cast of unheralded players, who are more than content to be known just as dedicated jazz musicians—regardless of "name" recognition.

Track listing: Boppin' at Berlitz; Bop-n Swing Thing; Everybody's Got a Name; All Roads Lead Home; The Lamp Is Low; Apache Junction; Yamanashi Snow; Mimosa; A Felicidade; Blues for Redd; From This Moment On.

Boppin' at Berlitz; Bop-n Swing Thing; Everybody's Got a Name; All Roads Lead Home; The Lamp Is Low; Apache Junction; Yamanashi Snow; Mimosa; A Felicidade; Blues for Redd; From This Moment On.