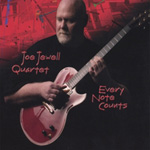 Fresh from the ranks of newly minted jazz guitar albums is this session from Joe Jewell, also known as Dr. Joseph Jewell (Doctor of Musical Arts in Jazz Guitar from the University of Southern California). Although Jewell has recording credentials in several genres, including film and television soundtracks, and has provided accompaniment to a wide variety of entertainers, this is his first album as a leader. The liner notes explain his reasons for selecting this material, which include his association with musicians.

Two reasons make me hold back this album from a more glowing recommendation. One involves the use of Fender Rhodes by Reed Gratz. The inclusion of electronic keyboards, especially as featured on such tracks as the Jimmy Smith-associated "Back At The Chicken Shack" and Sam Rivers' "Beatrice," brings back too many negative memories of the dark days of jazz during the 1970s.

Another hesitation comes from Jewell's interest in presentating his ability to play guitar in a different settings. Dr. Jewell talks about being influenced by rock guitarists like Jeff Beck, Eric Clapton and Mike Bloomfield, as well as the fusion work of Larry Carlton. On "Back at the Chicken Shack" it becomes apparent that Jewell can play music in the style of these above musicians. Athought this does indeed show his versatility, it also fragments the finished product.

Every Note Counts pays homage to several jazz guitarists: the opening "Something Special" is a Jim Hall composition, and the popular Bobby Hebb song "Sunny" is done up a la Wes Montgomery from his most popular period with Verve Records in the late 1960s. Thad Jones' jazz classic "A Child Is Born" is presented as an homage to Kenny Burrell. Jewell also renders a version of Bruno Bartino's "Estate" as a nod to either guitarist John Pisano or Joe Diorio and leads into it via a composition from Paraguayan composer/guitarist Aujgistin Barrios Mangore ("La Catedral"). The group plays other pieces, like Dietz and Schwartz's "Alone Together" and Thelonious Monk's "In Walked Bud," attractively. Unfortunately, Cole Porter's "Dream Dancing" is marred by a heavily amped guitar opening and a lengthy Fender Rhodes solo.

Something Special; Sunny; La Catedral(Prelude)/Estate; A Child Is Born; Alone Together; Back At The Chicken Shack; Beatrice; I've Grown Accumstomed To Your Face; While We're Young; Dream Dancing; In Walked Bud.