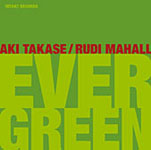 One of the things that become obvious whenever a musician is recorded frequently is how they address what has gone before. Pianist Aki Takase has her own distinctive voice as instrumentalist, composer and performer, but evidently—and happily—that triple threat isn't enough. She also has an uncommon knack for bringing something fresh to whatever music she cares to tackle.

The whole of this disc is a case in point, and its title is the antithesis of the product of passing thought. The bass clarinet has rarely if ever been featured in this spare setting, but the results suggest it should be more often. Staying with antitheses, the duo's reading of Tadd Dameron's "Good Bait" encapsulates the kind of communicative joy that's antithetical to sterile technical exercise. It's by no means unique in that respect. Duke Ellington's "Mood Indigo" has a mile-wide streak of Thelonious Monk running through it, and in a manner that's so far from obvious that perhaps no-one's ever managed to pull it off with such aplomb.

As a player Mahall has nothing of Eric Dolphy's guttural tendencies in the bass clarinet's lower end, but at the same time he also shows none of that man's mercurial spirit. Instead there are faint echoes of Lee Konitz in the studiedly faltering nature of some of his lines. This is apparent on "Bel Ami" which, if this reading is anything to go by, was written with playfulness in mind. Takase certainly seems to think so, but the humor is implicit in her lines as opposed to the product of mere calculation.

The tempo on Bud Powell's "Cleopatra's Dream" is taken down a notch or two from a frenetic bop workout, but the effect is to lend this idiosyncratic line a quality it might not otherwise possess. As a matter of course both players are right on it anyway, the back-and-forth nature of their communication allowing both space and light and shade to seep into the performance.

Ellington's "I'm Beginning To See The Light" borders on the free, but respect and love for the melody comes through too. Monk's there again, adding to the potency of the brew and the deeply nourishing nature of the music, which serves as a soundtrack for the tradition being afforded the measure of respect it deserves rather than the tiresome reverence the penguin-suited flunkeys treat it with.

It's stating the obvious to call it a gas, but overall that's just what it is. It's also notice of "the music" as elementary but benign force, the product of collective will forged out of the efforts of countless souls. Oh, and it'll put a smile on your face too.

Mood Indigo; I'll Remember April; Bel Ami; Tea For Two; Moonglow; You And The Night And The Music; How Long Has This Been Going On?; Cleopatra's Dream; I'm Beginning To See The Light; Two Sleepy People; Good Bait; You Took Advantage Of Me; It's Only A Paper Moon; Lulu's back In Town.