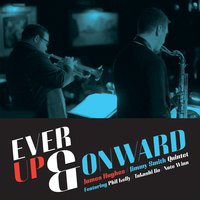 Detroit was once a vital jazz center, contributing some of the major hard bop artists of the 1960s: Hank, Thad, and Elvin Jones, Tommy Flanagan, Barry Harris, Paul Chambers, Kenny Burrell, and Ron Carter, just to name a few. The James Hughes & Jimmy Smith Quintet honors that tradition by playing mostly original hard bop with real flair. In addition to being strong soloists, saxophonist James Hughes and trumpeter Jimmy Smith contribute all of the compositions and arrangements.

Smith says that the opener "Audio Culture" was inspired by trumpeter Woody Shaw. It's also reminiscent of Herbie Hancock's "Maiden Voyage" in its insistent modal vamp, and introduces the band in a bright, upbeat fashion, with pianist Phil Kelly turning in an ebullient solo. Smith's "East Detroit" has a similar modal sound, driven by an ostinato figure doubled by bass and piano, inspired by the group's drummer Nate Winn. Hughes contributes "Dots," another upbeat song he describes as "like a sugar rush." "Zebras, Penguins and Bunny Rabbits" (the favorite animals of Hughes' three nieces) has a catchy tune that could make a good TV show theme.

The first cover tune in the set is also the closest thing to a ballad, a creative arrangement of the traditional "There Is A Balm In Gilead," which features a fine solo by bassist Takashi Iio. The album closes with two standards. "I'll Remember April" is a jam session favorite, given a fresh latin arrangement to keep things from being too predictable. "I'll Close My Eyes" is played straight, a swinging, romantic ending to the program. This is consistently up music—in the sense of being mostly up-tempo, as well as energetic and optimistic. Ever Up & Onward is an especially apt title. A distinctly modern take on hard bop, Detroit style.