Ahleuchatistas: Even In The Midst.... 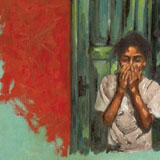 If the notion of "post-rock" can be seen as something other than downright facetious for a moment, then the idea that such a canon would take in the likes of both Captain Beefheart and Pere Ubu ensures that Ahleuchatistas belong there also. Such labeling, arbitrary as it inevitably seems, serves a purpose in this case in locating terms. At the same time it serves no purpose at all when the hyperactivity and woozy syncopation of "Take Me to Your Leader Never Sounded So Alien" is so distinctively this band's own. Indeed, it could feasibly be the case that such qualities are symptomatic of impatience with form; certainly any restlessness this might suggest is conspicuous only by its absence on this one, passages of which are shot through with ineffable beauty.

If there are hints of progressive rock here, then they are of an order that has similar impatience with virtuosity and technique as ends in themselves. This is nothing but a good thing, especially when the myriad alternatives to those forms of showing off are brought to the fore on "Post-Colonial Nausea," where tempos seem to stack up in the more frenetic moments, and guitarist Shane Perlowin seems more concerned with his instrument as a generator of disparate noises than anything else.

The initially dark hues of "Prosthetic God" are usurped by collective preoccupation with tempo, but again the way in which the trio utilizes it is fundamentally at odds with any tyranny of the virtuosic. The results are, in this instance, more playful than anything else, a group playing at such a simpatico level because they can and not out of any facile desire to impress.

On one level "Swimming Underwater With A Cat On Your Back" invalidates any thoughts of Beefheart as anything other than a point of reference. Where his music and that of his Magic Band was arguably the result of an individual sensibility and the willingness of others to adapt to it, here there's a greater sense of collective will, shaping the music in the moment, a point which just might account for its relative fluidity.

When it comes down to it, the sheer joyous angularity of this music is in relatively short supply and that simple fact has the effect of taking it to another level.

...Of All This; Post-Colonial Nausea; Red-Coated Emergency Exit; Cup Of Substance; The Bears Of Cantabria Shall Sleep No More; Prosthetic God; Elegant Proof; K-Bit; Brilliant Danderkovs; Take Me to Your Leader Never Sounded So Alien; Swimming Underwater With A Cat On Your Back; Where We Left Off.